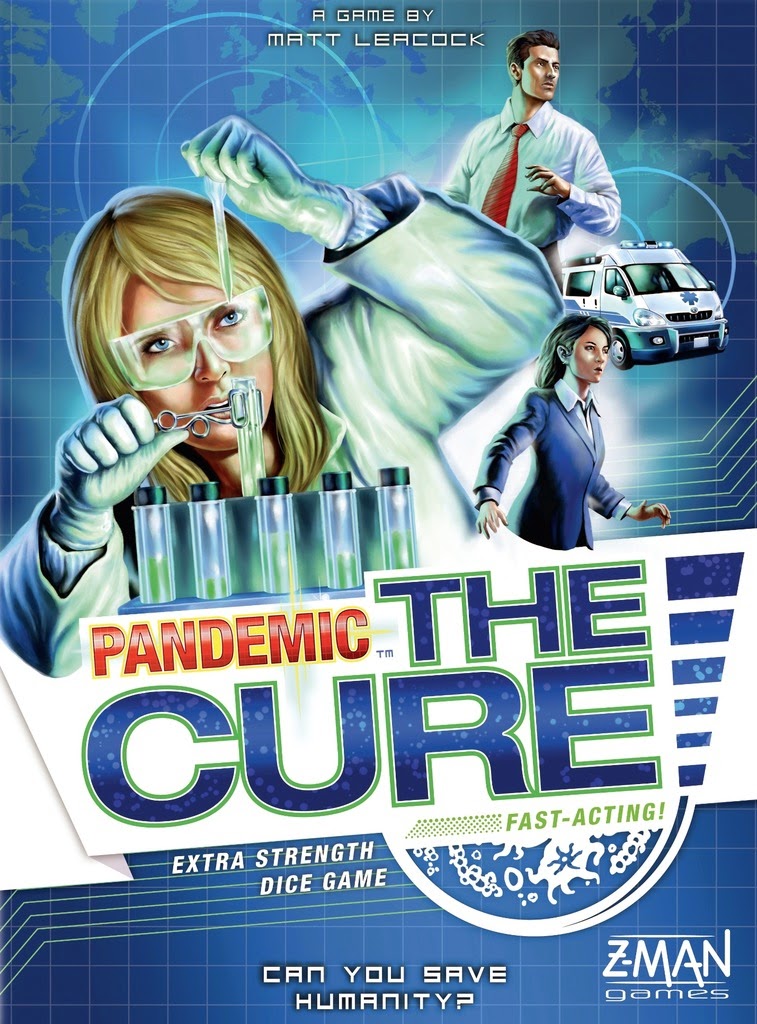 Generally it means you're playing against an opponent who's better, in which case you can learn something from them (if you're paying attention) ... or maybe you're new to the game playing others who know it, easily remedied through repeat plays ~ practice makes perfect ... or in the case of co op/ solitaire games, a loss can mean the game itself is actually presenting you with a challenge! And a good challenge is what I like.

Just a few days back I received a copy of...
Pandemic: The Cure ... Z-Man games were giving it away as a prize on the BoardGameGeek and I was lucky to be one of the handful of winners. Thank you Z-Man games ;)

Since my first game I have been hooked.
This is a co op in which a team of two to five individuals do their best to prevent four rapidly spreading insidious diseases from decimating the population of our planet. 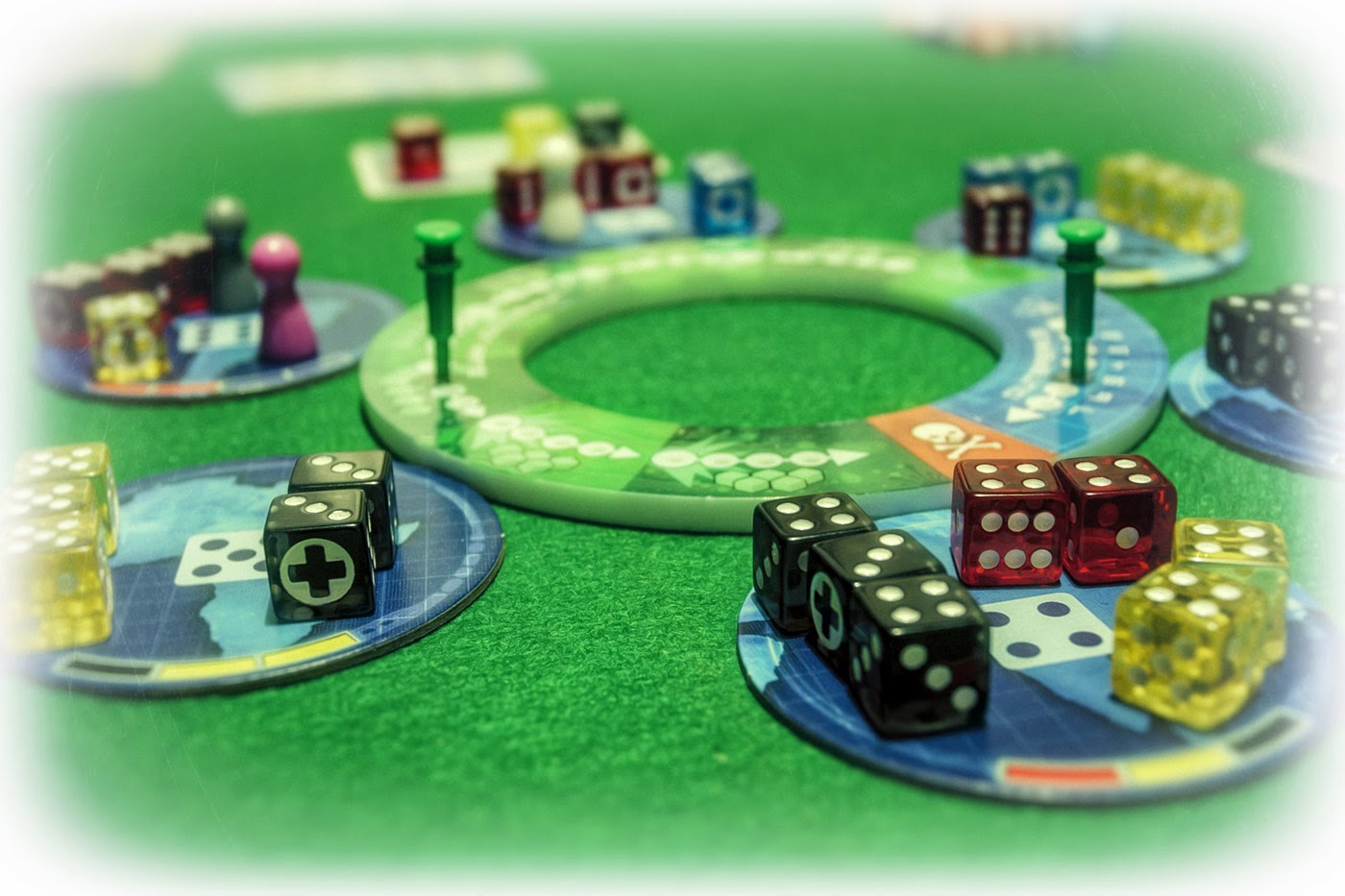 A multitude of cube-like pathogens encroach across the globe.

Each of the diseases is represented by a different coloured die: red, blue. yellow and black. A certain number (depending on the infection rate) of these dice appear randomly around the globe following each players turn. When a particular continent houses too many of one of the four colours of dice, there is an outbreak and the disease spreads further across the globe.

To win you must find a cure for the diseases - to do this you must first treat the inflicted, take samples ...and then attempt to discover the cure, using the samples acquired. You roll a die for each sample you have in your possession, of one colour ...if you manage to score 13 or more - success! A cure found does not prevent the disease from rearing it ugly head up again ...but it does make it easier to treat.
When all four diseases have had a cure found for them the game is won.

The game though can be lost through three means. One; the bag containing the disease dice emptying, or two and three; the syringe marker reaching the end of the Infection or Outbreak tracks. Our brave heroes ...faces obscured by stacks of action dice ~ my bad.

There are several different characters that are up for the task of saving mankind, each having their own special abilities. The Scientist gets a bonus when rolling to find a cure, the Dispatcher is great at providing transport to move himself and others around the globe, the Medic can treat masses of people at a time and the Generalist gets bonus action dice, for example. I select three random characters to use each time I play - the different combinations of skills make each game rather unique.

Speaking of action dice; each character has their own personal pool of dice - displaying icons specific to that character. Some of the icons are common to all of the different characters' dice, the Bio-hazard and Take Sample icons are two if them. Each turn you roll all of your available action dice (sample bottles containing diseases are locked). Any bio-hazard icons rolled advance the marker on the Infection Rate track ~ which may cause an epidemic, adding more disease dice to the continents, which may cause outbreaks, which may if you're unlucky cause further outbreaks, which may... You get the picture. 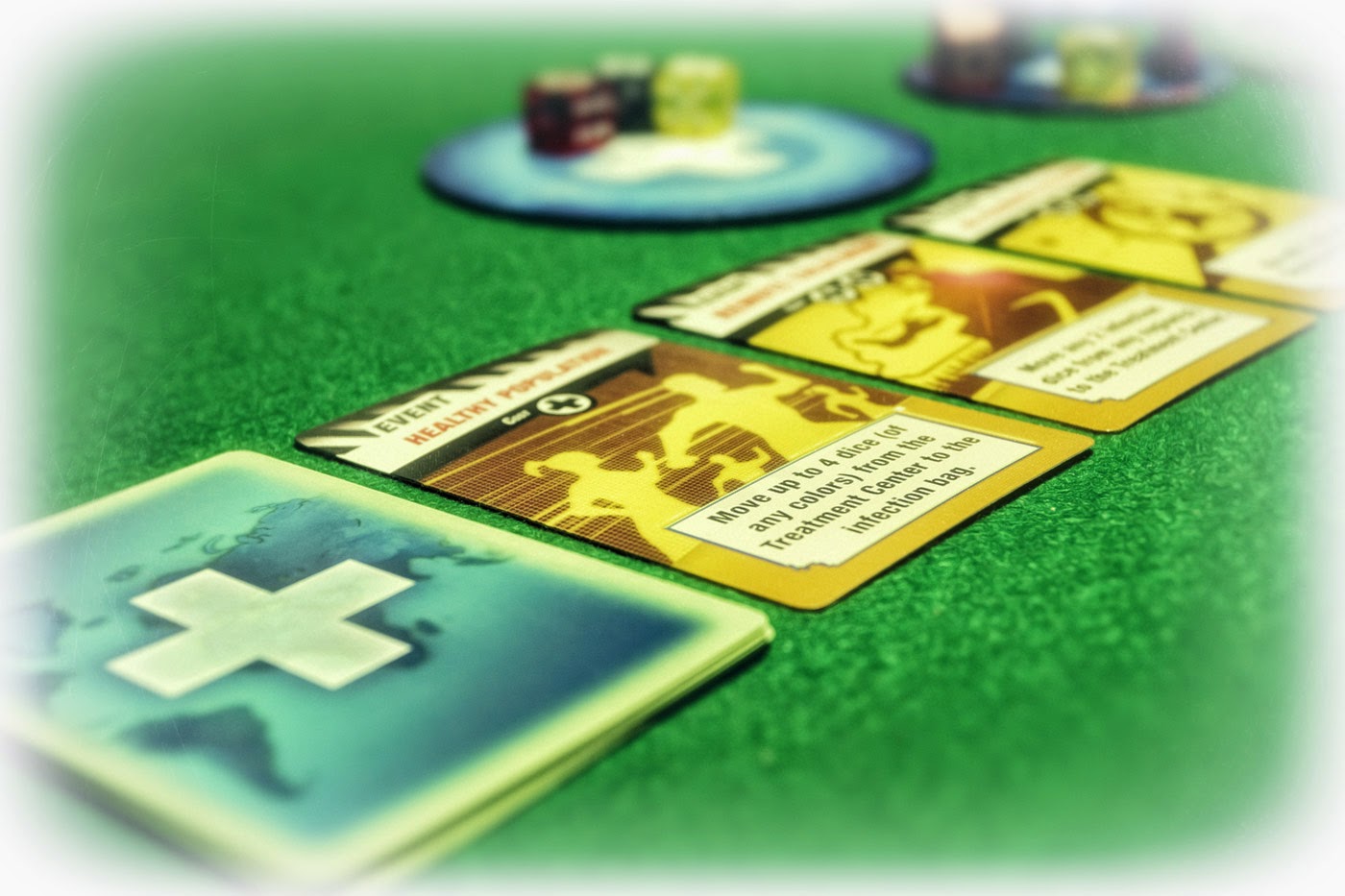 Events - our heroes need all the help they can get!

Any other dice rolled can either be spent on the actions displayed ...or re-rolled any number of times until either an action is revealed you'd like to perform, or a bio-hazard is rolled - which occurs, as above, and locks that die for the turn.

There are also Event cards that can be purchased for one-off effects ~ such as re-rolling dice, moving players around the globe and treating the sick. When you roll the disease dice to see where they appear on the globe, there is a chance you will come up with a cross icon, if this happens you place the die/dice on the CDC. These can be used to purchase event cards when the need arises. 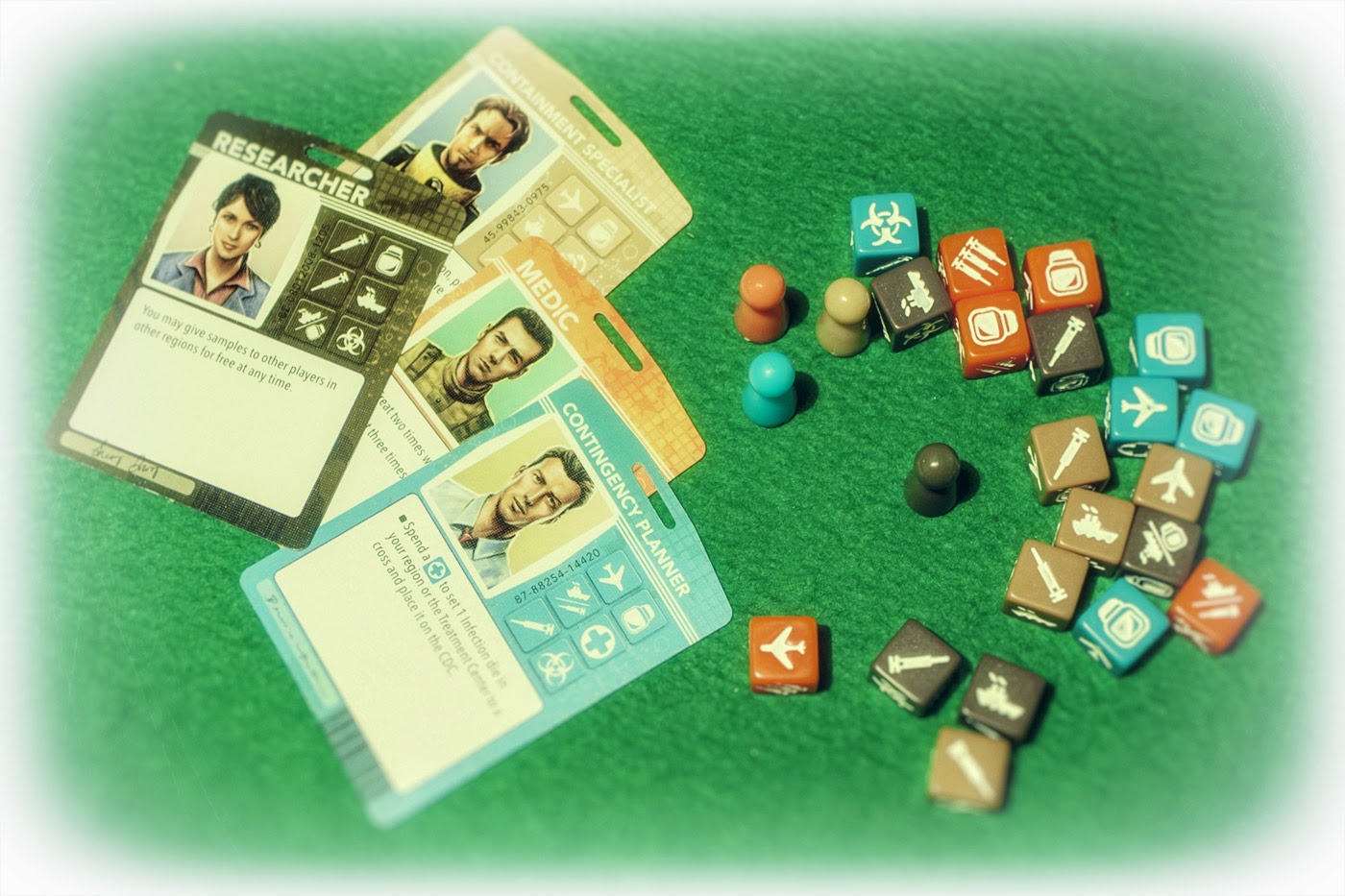 Sitting out for the round while their associates fight for the fate of mankind.

I really like the challenge of this game. It appears to have a great balance between the randomness of where the diseases will appear and the results you'll get with your action dice rolls ...and the decisions on when and if you re-roll your action dice to try for the results you desire, and what you decide your actual plan is each round to contain the threats abound. I also like the fact you can play at varying difficulty levels ~ intro, normal and heroic. I played my first game on intro; each game since has been on normal - which is by no means easy - I think I've only beaten it twice in about ten games. I look forward to hitting heroic once I have a few more games under my belt. 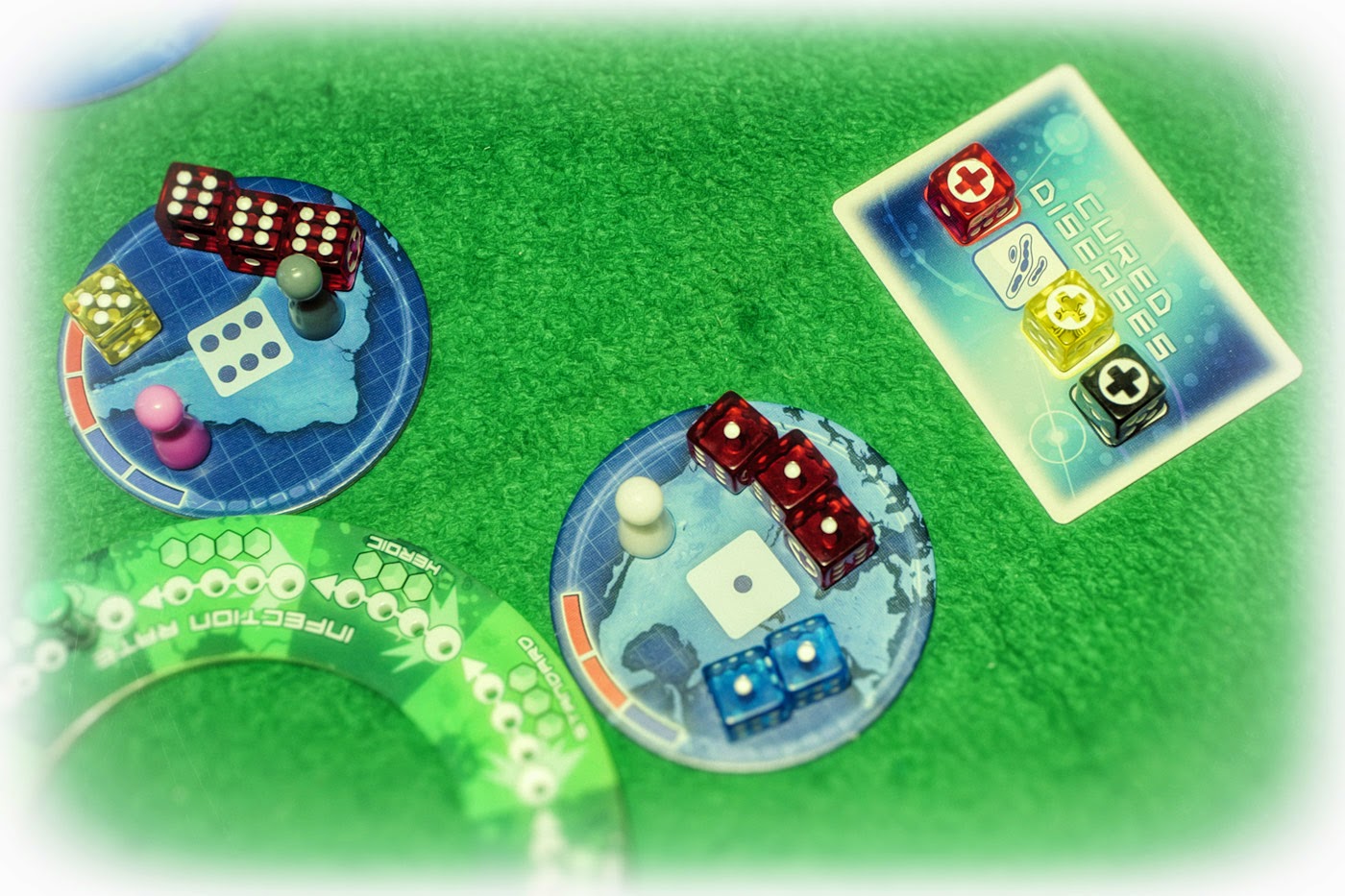 Three down, one to go ...but an outbreak is imminent!

I play this predominantly solitaire and it is so good. It's a quick game too ...it says thirty mins on the box, but I find playing alone I can finish in fifteen to twenty. One game was about ten minutes, but I don't recall that one going in my favour. The great thing about it being so quick is that you are very much (well I am) inclined to set it up for another round!