"Do hurry, Jenny darling, we're going to be late for the premiere screening."

"Dexter dear, they'd never start without us ...we ARE the stars of the show."

"Hmmmm ...well, just don't forget to tuck your twin 45's into your blouse. You know whenever we go anywhere some unhinged $#!% always goes down."

Dexter, as usual, was right.

Over the last couple of evenings, my wife and I, have been playing the Mansions of Madness board game from Fantasy Flight Games. I've always had a fondness for H. P. Lovecraft's strange tales ~ and the movies and games inspired by them.
MoM is one I absolutely love ... it's like the Call of Cthulhu RPG become a 'dungeon delving' Descent-like Cluedo. 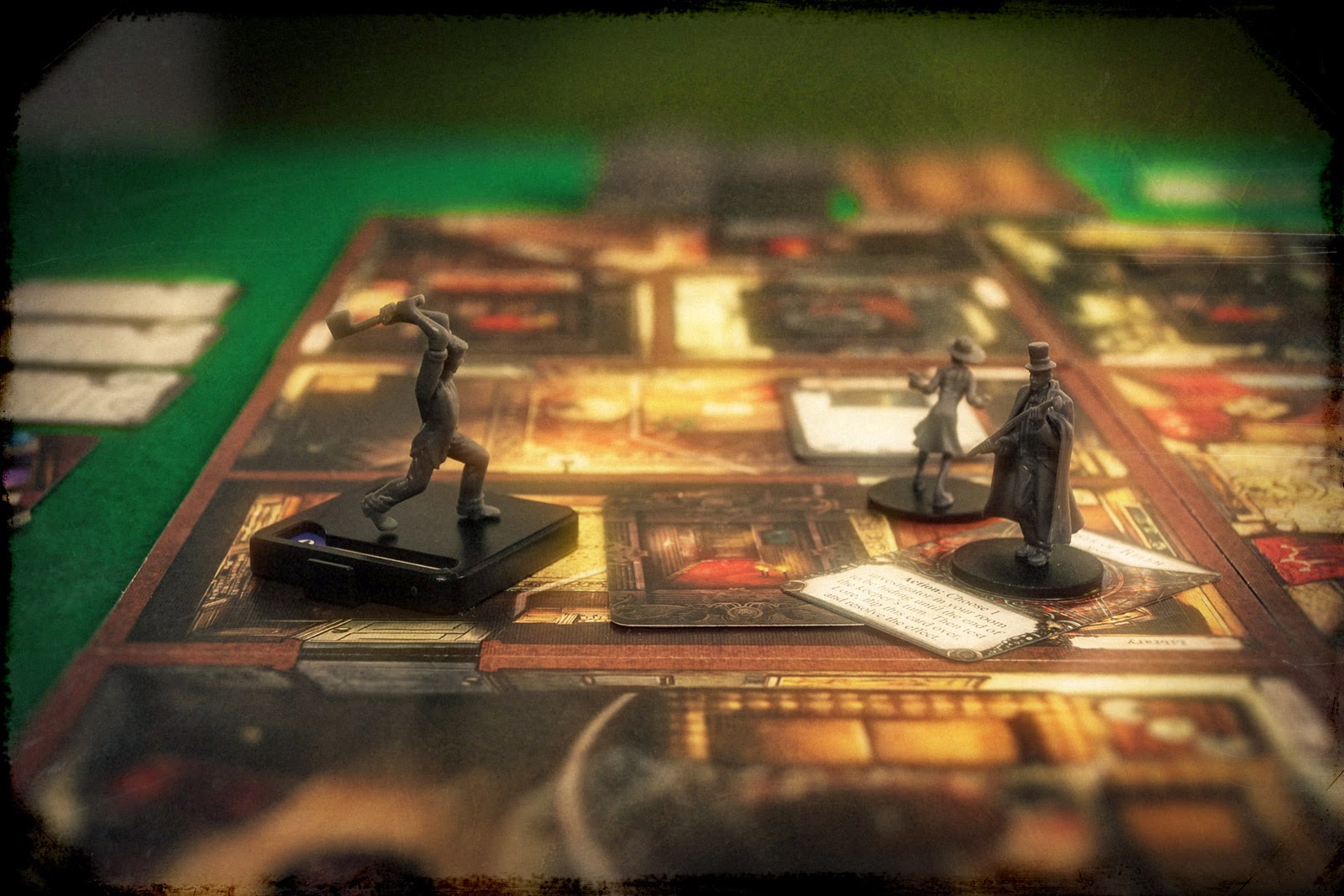 Another crazed fan ..."No! I don't give autographs"

The base game contains several mysteries for your intrepid investigators to solve ~ each one has a set of clues that must be uncovered and various tasks that need to be completed to win; involving solving puzzles of differing types, uncovering specific items, surviving unnameable horrors (and their minions) ...and endeavouring to keep your sanity! ...to name a few. 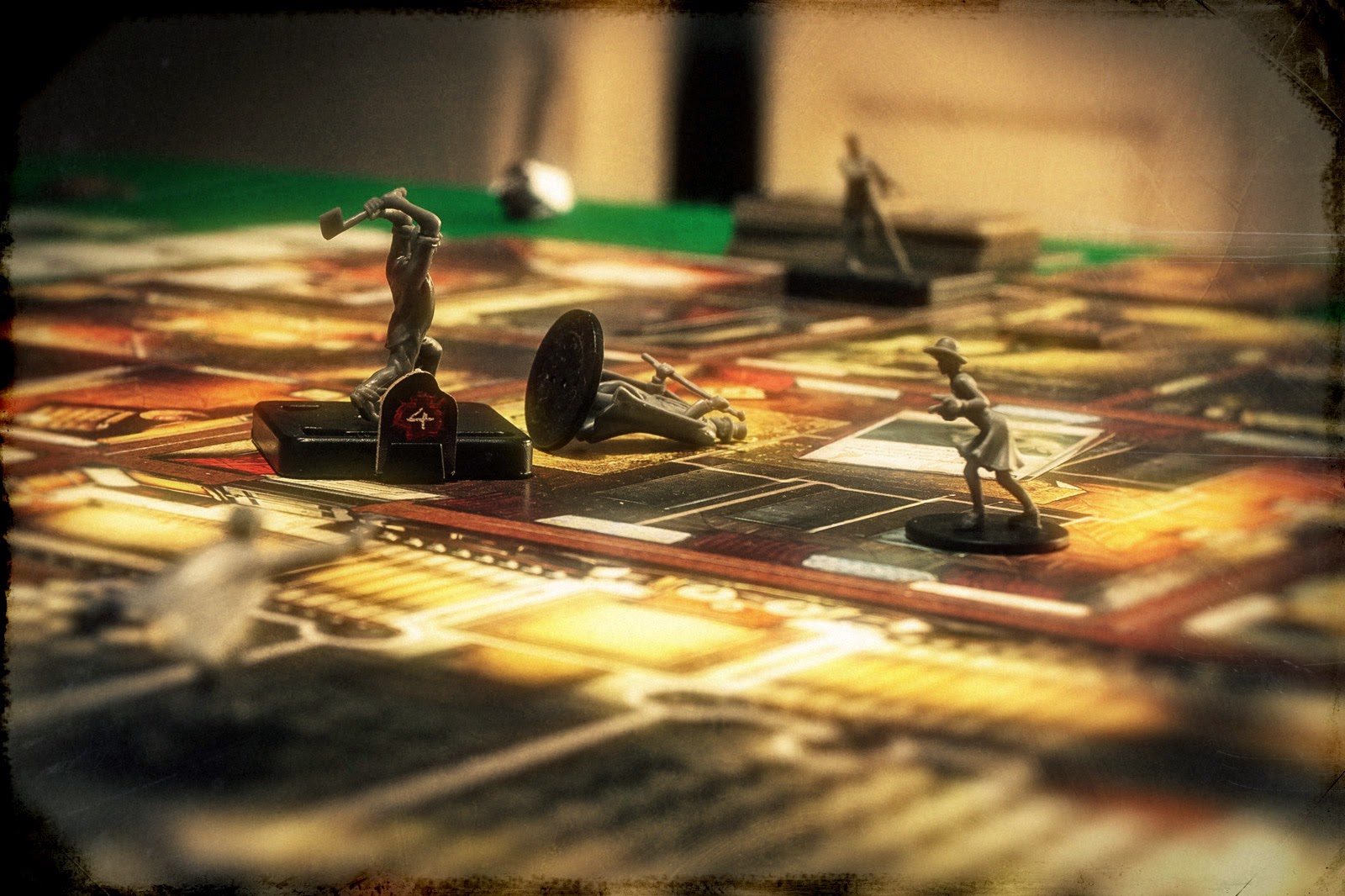 Dexter's top hat, along with the top of his skull, is clipped clean off.
A tragic end to such a talented actor.

As well as the investigator players there must also be one who plays as the Keeper ~ controlling the denizens of the dark and with their own agenda they must meet to claim victory.

Each of the adventures has a selection of clues (only certain ones are used depending on the Keeper's set-up choices) and other cards that can be laid out differently each time you play, creating a variation on the path that must be taken to solve the mystery. 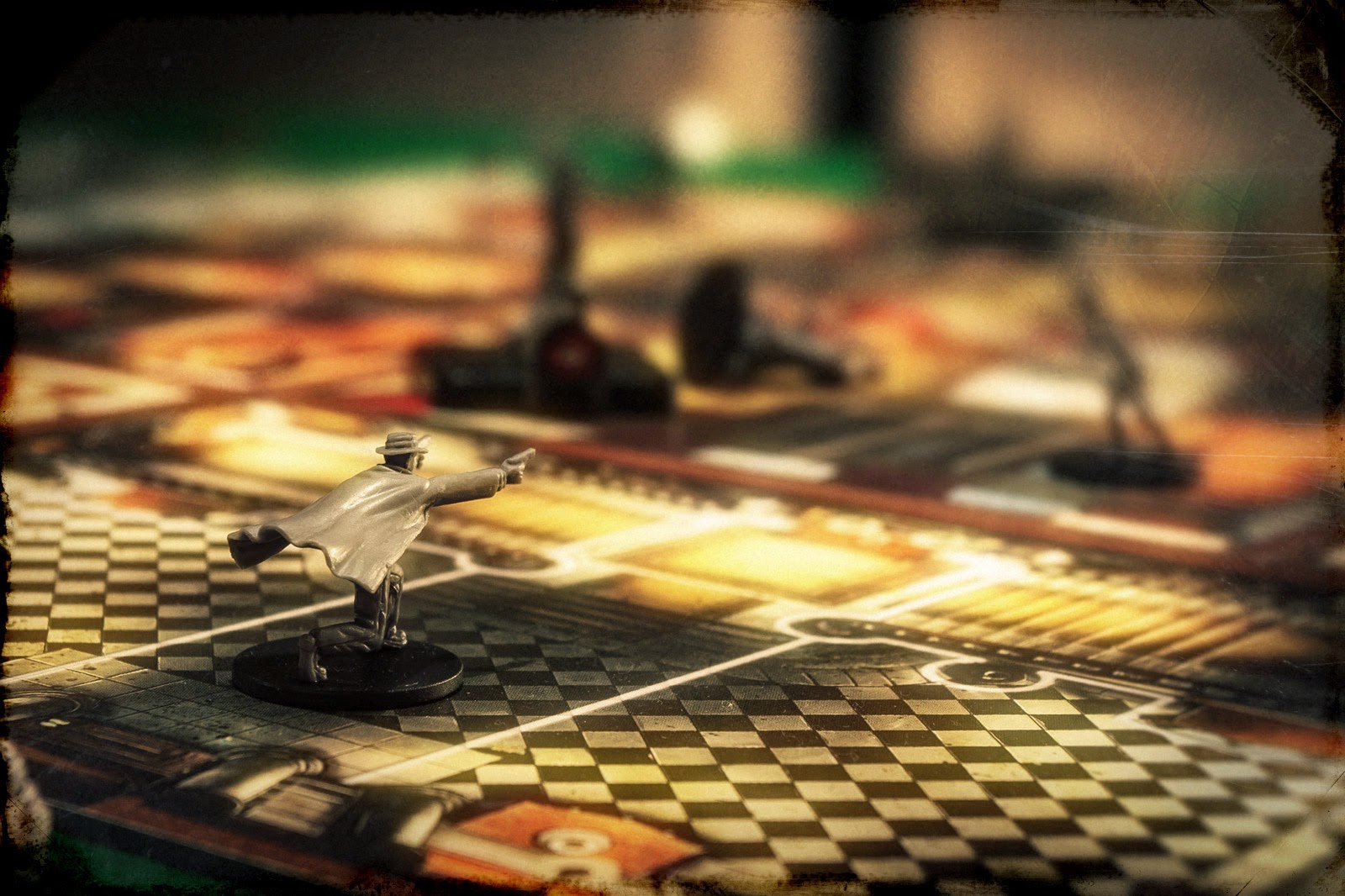 Understudy, Joe Diamond, bursts into the foyer to save the day ~ as well as pick
up a Choc-Bomb and large-size box of popcorn from the kiosk

As I mentioned above, my wife and I had played over the last couple of evenings ...this is not because it is a hugely long game; it would usually fit nicely into one evening. It's just that we started late on the first night and she had an early start ...It worked well though, as the particular adventure we were on was "House of Fears" (a PoD expansion pack) revolved around the premiere viewing of a horror flick the investigators had starred in ...we took it as the Intermission ;) 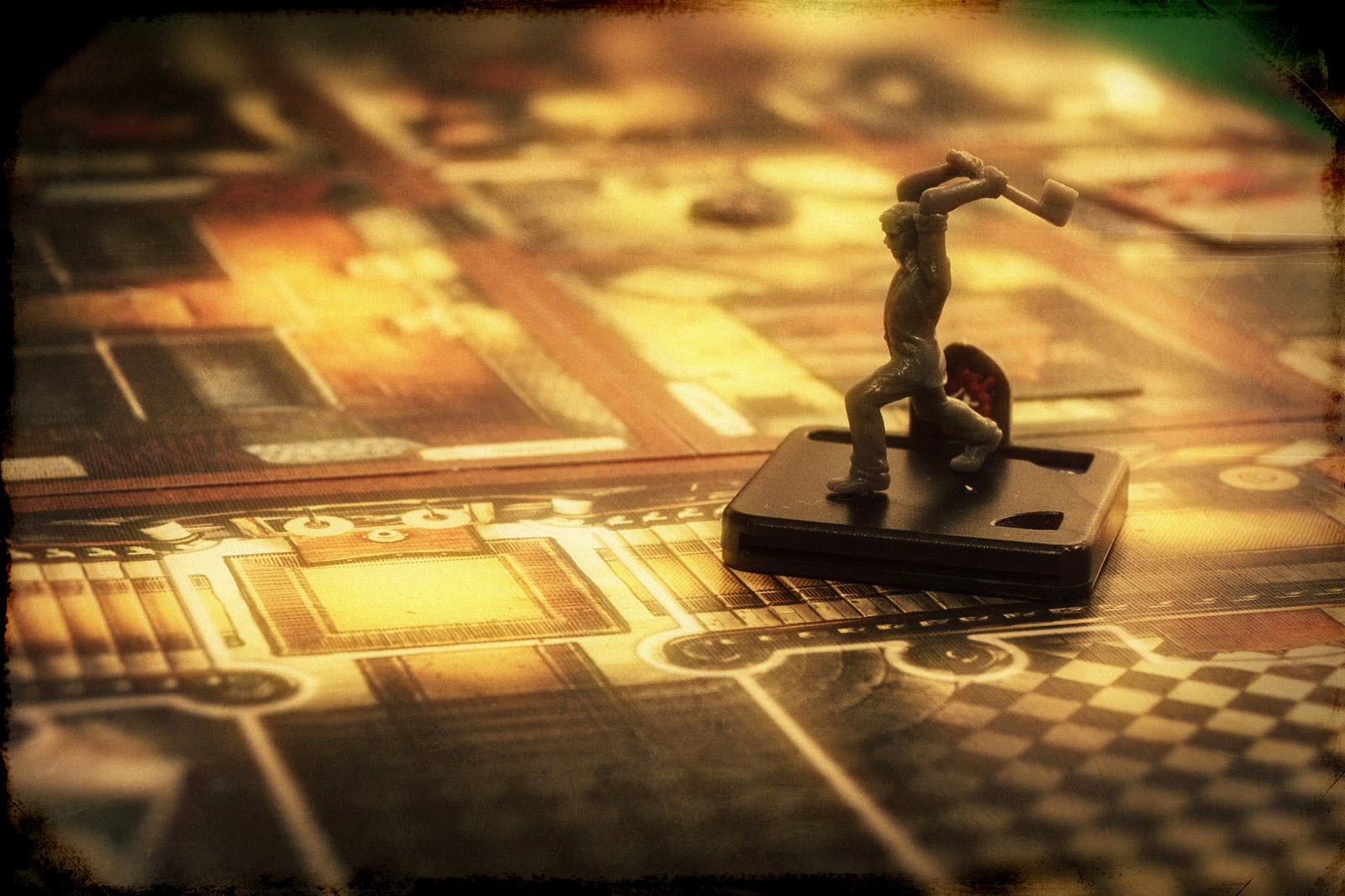 Another adoring fan ...no? Oh, it's the ectoplasmic embodiment of a disgruntled ghost actor
in the form of an axe-wielding maniac ...Easy mistake to make

There are a couple of boxed expansions and several PoD (print on demand ...not to be confused with 'print and play') adventures available. I have them all (like I said, I love this game). Reviews on the 'Geek range the various adventures among them from not-so-good to fabulous. I for one have enjoyed every one I've played. The "Forbidden Alchemy" boxed expansion added chemical formulae based puzzles and mad-scientistesque adventures ...and the "Call of the Wild" boxed expansion added lots of outdoor action, allies and puzzles for the Keeper to solve. Each box also adds new investigators, mythos beasts and a plethora of cards, tokens and new map pieces to the mix. The PoD adventure packs contain a single adventure and the cards required to play it ~ no extra figures, tokens or map pieces.

I must say, there were a few errors in the early printings ... but FFG were great and included re-printed cards and errata in their expansions. Also, if you look at the MoM section on the 'Geek you can find 'adventure tweaks' that will fix loopholes discovered in some of the adventures. I do like FFG games ... but they can seem to sometimes be a little lax in their play-testing (except for when I've been a play-tester ...of course ;p) 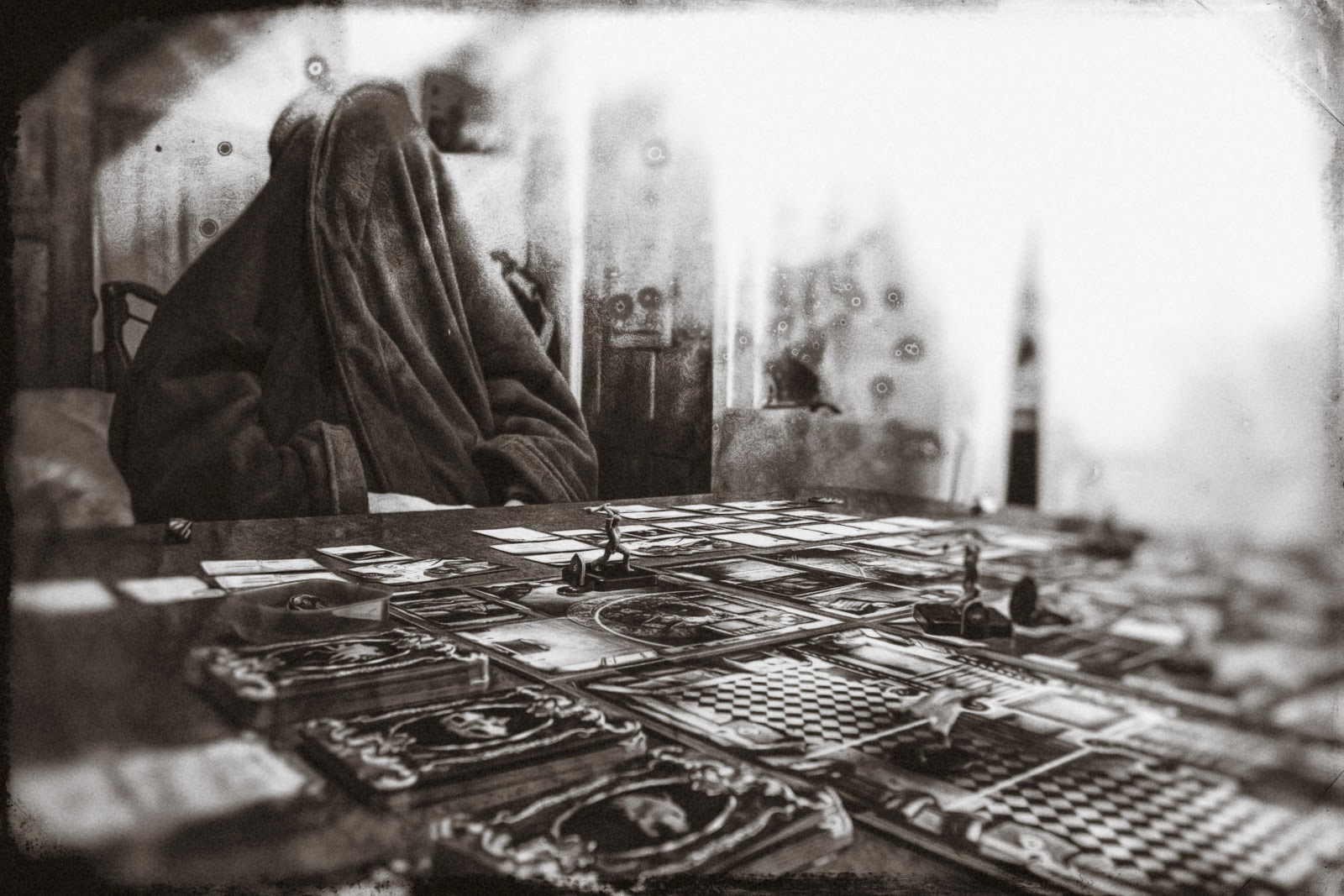 My opponent ...becoming more discorporate as the night draws on

Mansions of Madness, another game rich in theme just begging for a lick of paint ...it's on my list ;)