No new games of recent have really caught my eye ...ok, so that's a bit of a lie ~ quite a few have; but none have given me that 'must have urgently' feeling.
I though love to have the courier knocking at my door, so I thought I'd take a peek at the BoardGameGeek store and see if I could find some tasty morsels.
I was in luck. In the Promos area I located some great pieces that would slip right into a handful of my favourite games.

In just over a week there was a rapping on the door ...they had arrived. 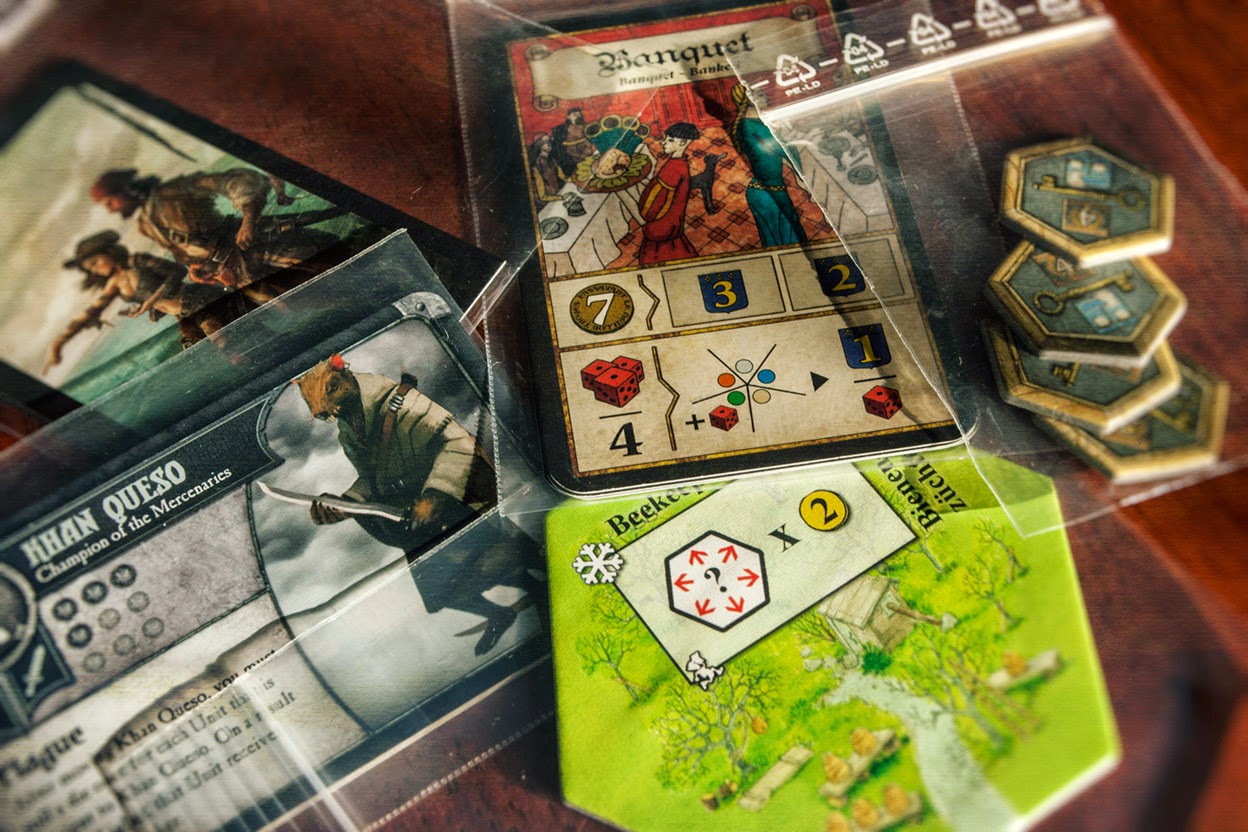 A melange of cardboard goodness.

On occasion, when you get a full blown expansion for a game, you can find it changes the game you love into one you are not quite so fond of. The game may still be great ... but the something that made the core game amazing seems to have been lost.

I've found though that with these (new items that were just handed to me by my friendly local courier) and other promos I've acquired in the past, it's generally a case of adding a little more of what already existed in the game ~ but with a twist.

That said ... the promo for Robinson Crusoe: AotCI was something new to the game ... Personality Trait cards (pack #1). I haven't had a chance to play with them yet but I can see they will be interesting. Selected randomly, each adds a pro and a con to your character ... the Kid for example refuses to take part in a Hunt, being scared stiff of wild beasts, but if at some point a beast does break through the camp's palisade he has the ability to hide away safe from harm.

These sort of cards I can see just adding more variation, interest and difficulty (the good kind) to this already fabulous solitaire/co-op survival game ... looking forward ;) 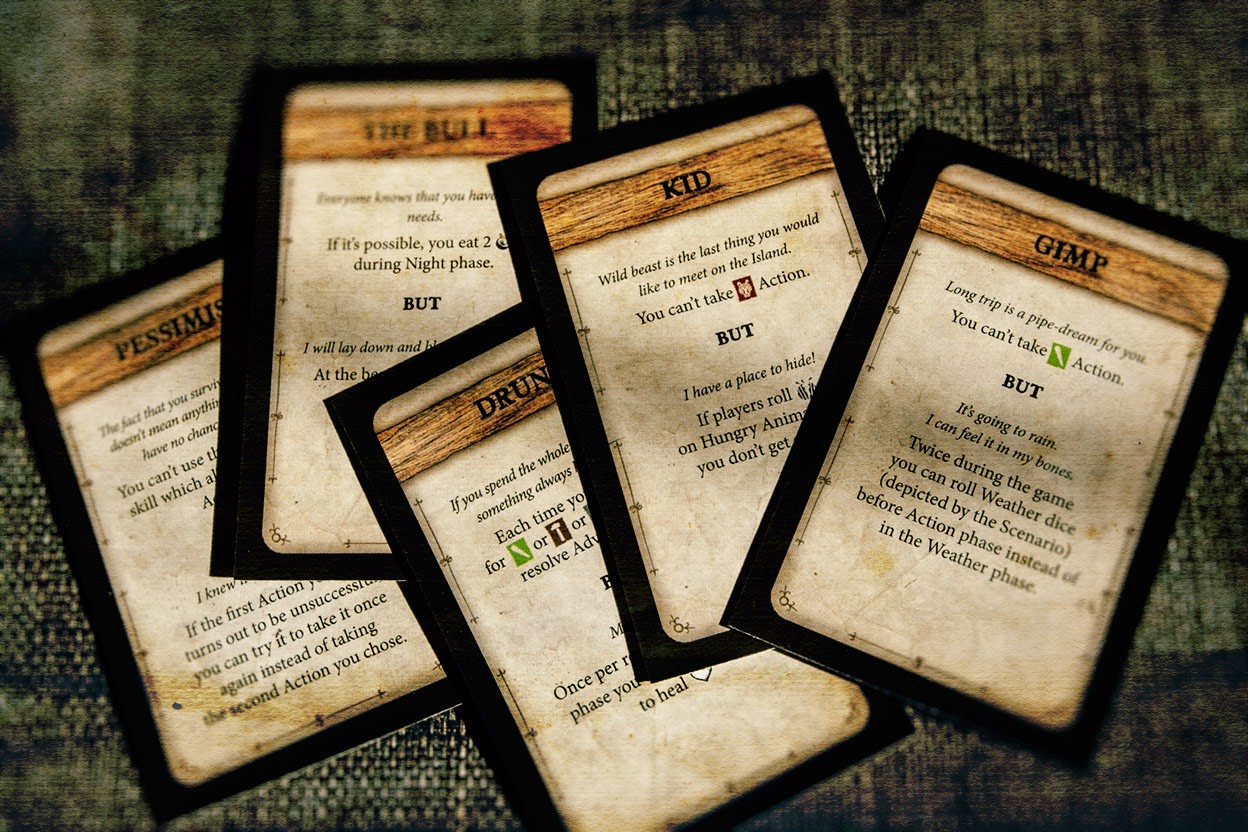 Next up were a small palmful of Village Bonus tiles for my newest game, one I absolutely love, Terra Mystica. These just add variation to the already available tiles, giving additional avenues for point scoring and advancement. Great stuff. 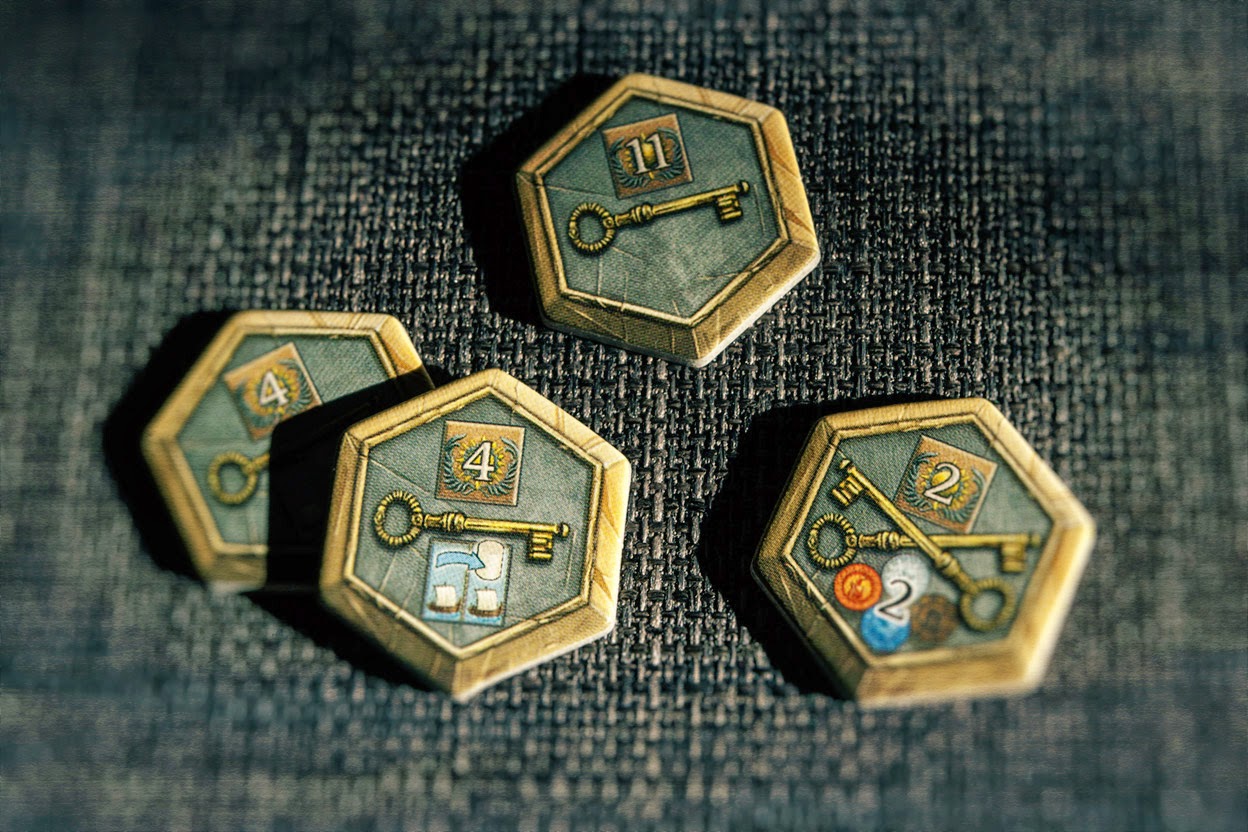 After a hard days building it was time for a cruise.

Another promo for the superb Keyflower; I have in the past acquired a few bonus items for this game... Key Celeste ~ the haunted brigantine, Emporium & Monument ...and now the Beekeeper.
Another tile in the mix, another way to gather points. 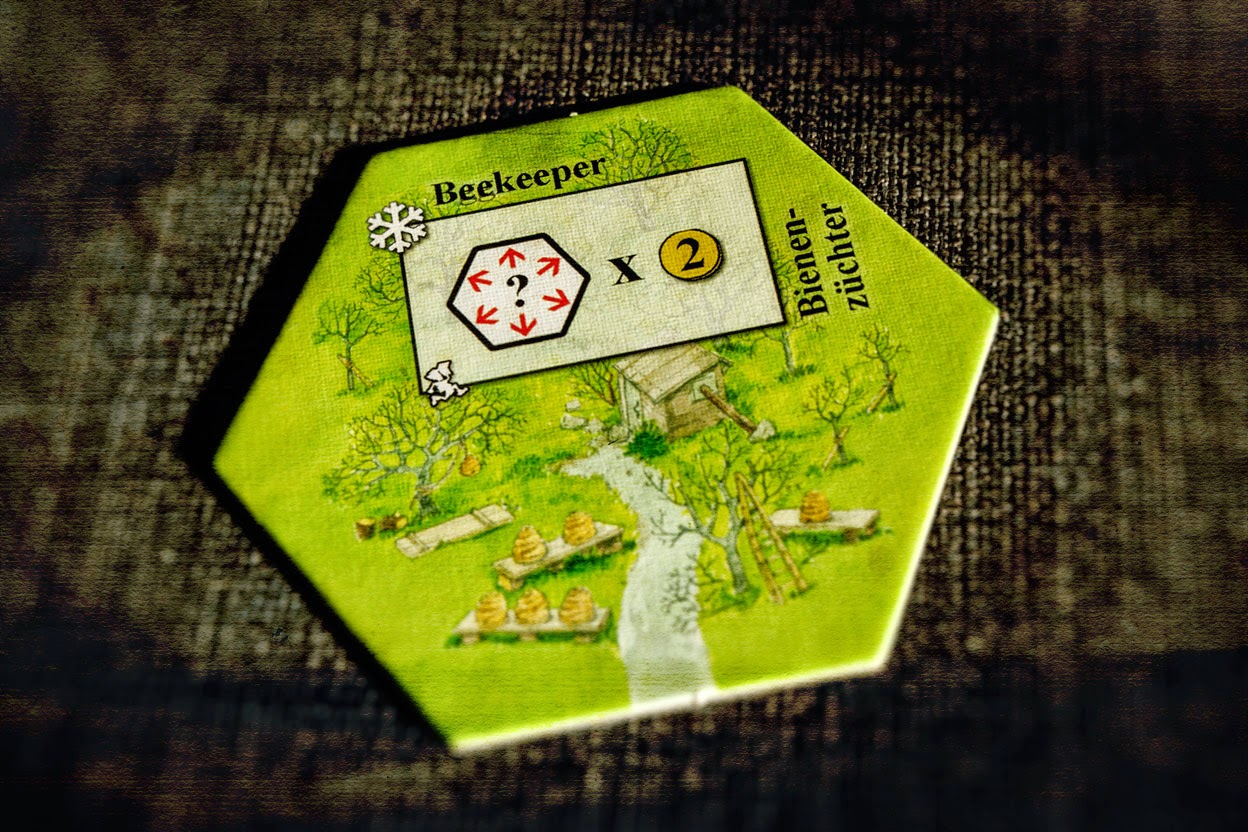 Four anthropomorphic Mercenaries for Summoner Wars. A game I really like but just don't get the chance to play enough. I'll certainly be packing it in my bag the next time I head north (nudge nudge wink wink). I only have the Master Set so it'll be fun to discover which race these critters align with. 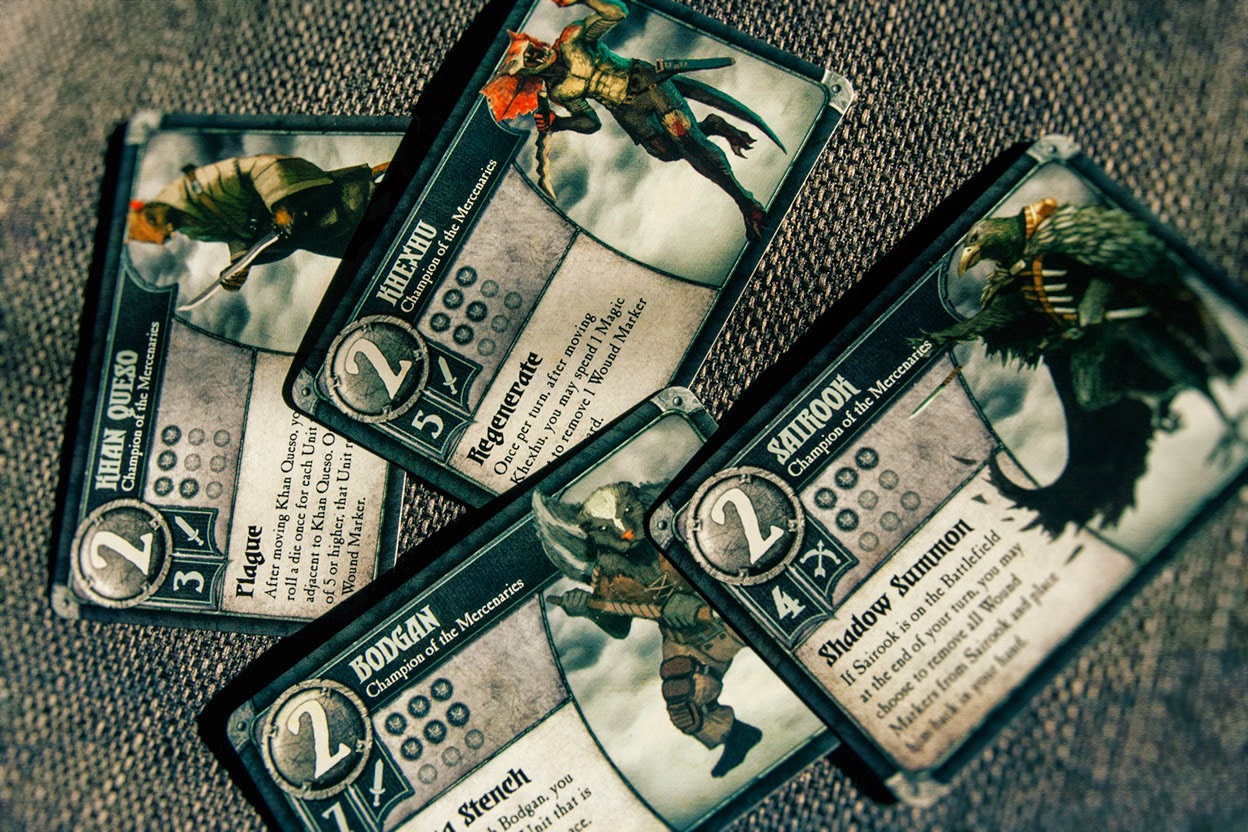 It's going all Kung Fu Panda.

Another four cards ... this time for Troyes, an interesting dice based worker placement game.
This promo contained one new card for each faction and a new event.
This is a game I haven't played in some time ~ it is a goodie though... I think these fresh faces will inspire me to drag it off the shelf and onto the table. 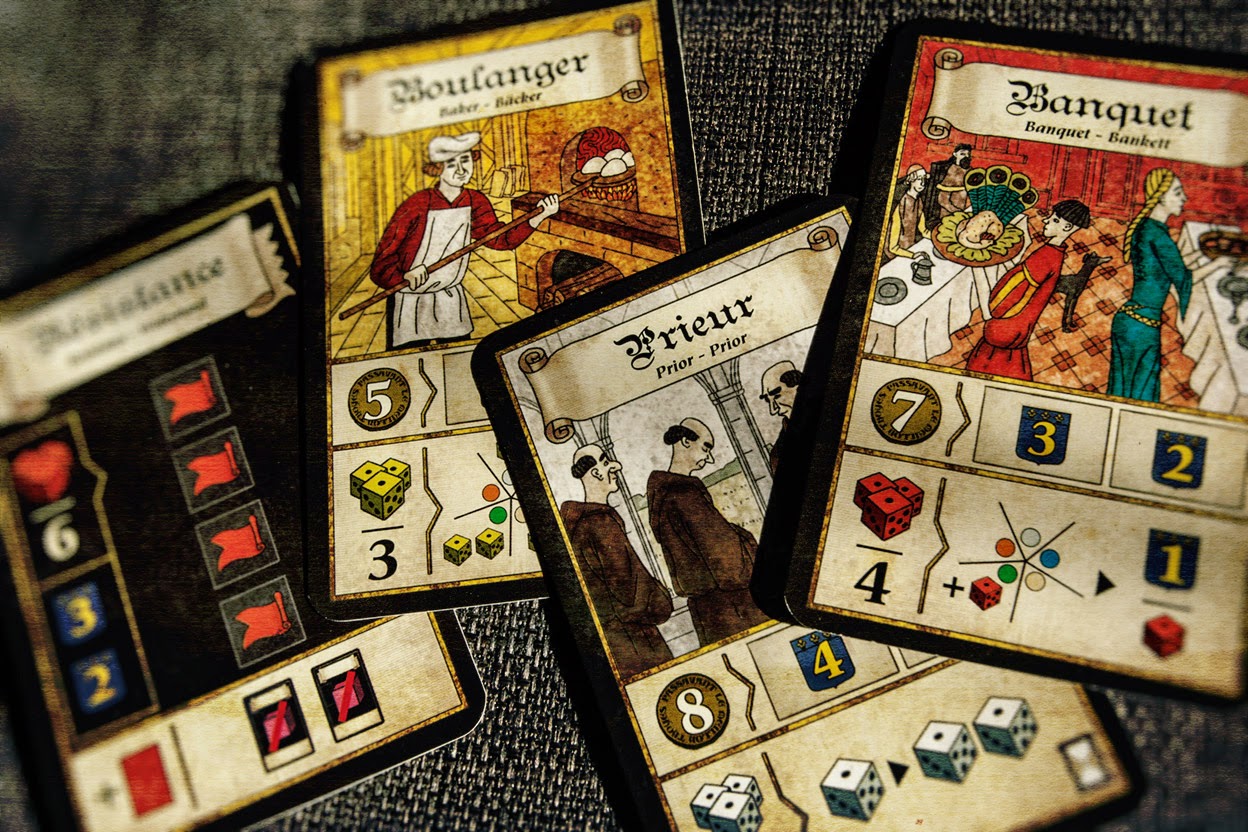 Looks like it's time for dinner... "for what we are about to receive..."

And if that all wasn't enough, a couple of days later a copy of Spielbox magazine appeared in my letterbox. Hey what's this tucked inside the bag... another promo... heaven forbid. Ooh, and it's another for that Terra Mystica. This time a new Round Bonus Tile ~ more power and victory points for shipping. Rubs hands together ;) 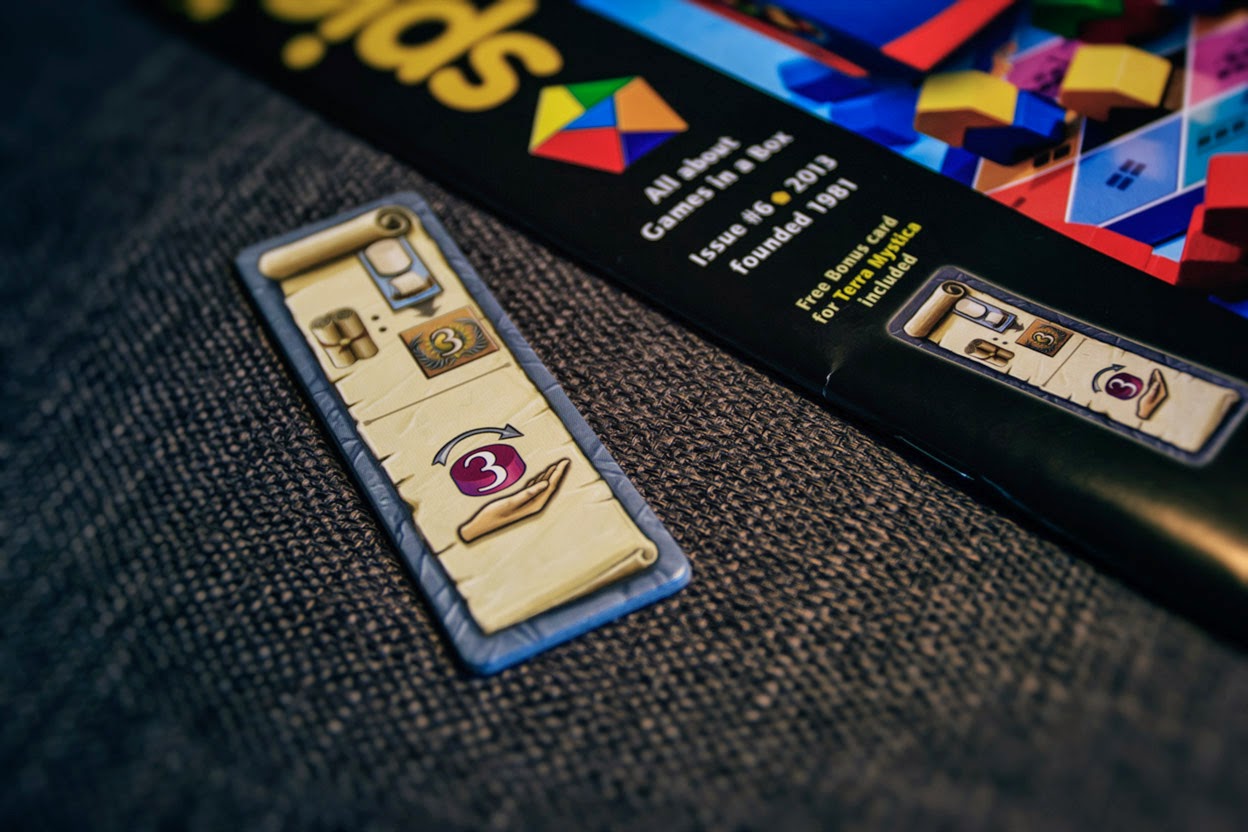 A good read with bonus cardboard.

Spielbox is also pretty good as they have a backlog of issues from over the past few years ... each with different boardgame promos within ... well worth a look if you're that way inclined.

For now though, I'm going to have to shelf all these goodies as I've just had another commission for a large bundle of my hand-sculpted Robinson Crusoe components. So it's time to get out my clay and tools, slip on my glasses ~ my ageing eyes just aren't what they used to be ...and get to work.
Luckily I love creating pieces for games as much as I like playing them.