Digging in the Dirt

A couple of weeks back I was lucky enough to get my paws on a game I'd had my eye on for some time ...the fabulous Terra Mystica from designers Jens Drögemüller and Helge Ostertag. I must say, this game has really struck a chord with me; after my first play I had fallen in love with it. I had read and/or watched several reviews and game-play run-throughs so had a reasonable feeling that it was going to be a game that I'd like ...but you never truly know if a game will be a winner until you've sat down and actually played the thing. I can see why it's ranked #4 (well, it was number #4 when I started writing this but now I see it's crept up to #3! ...Edit: and now 2 days after posting it's hit #2) on the BoardGameGeek. 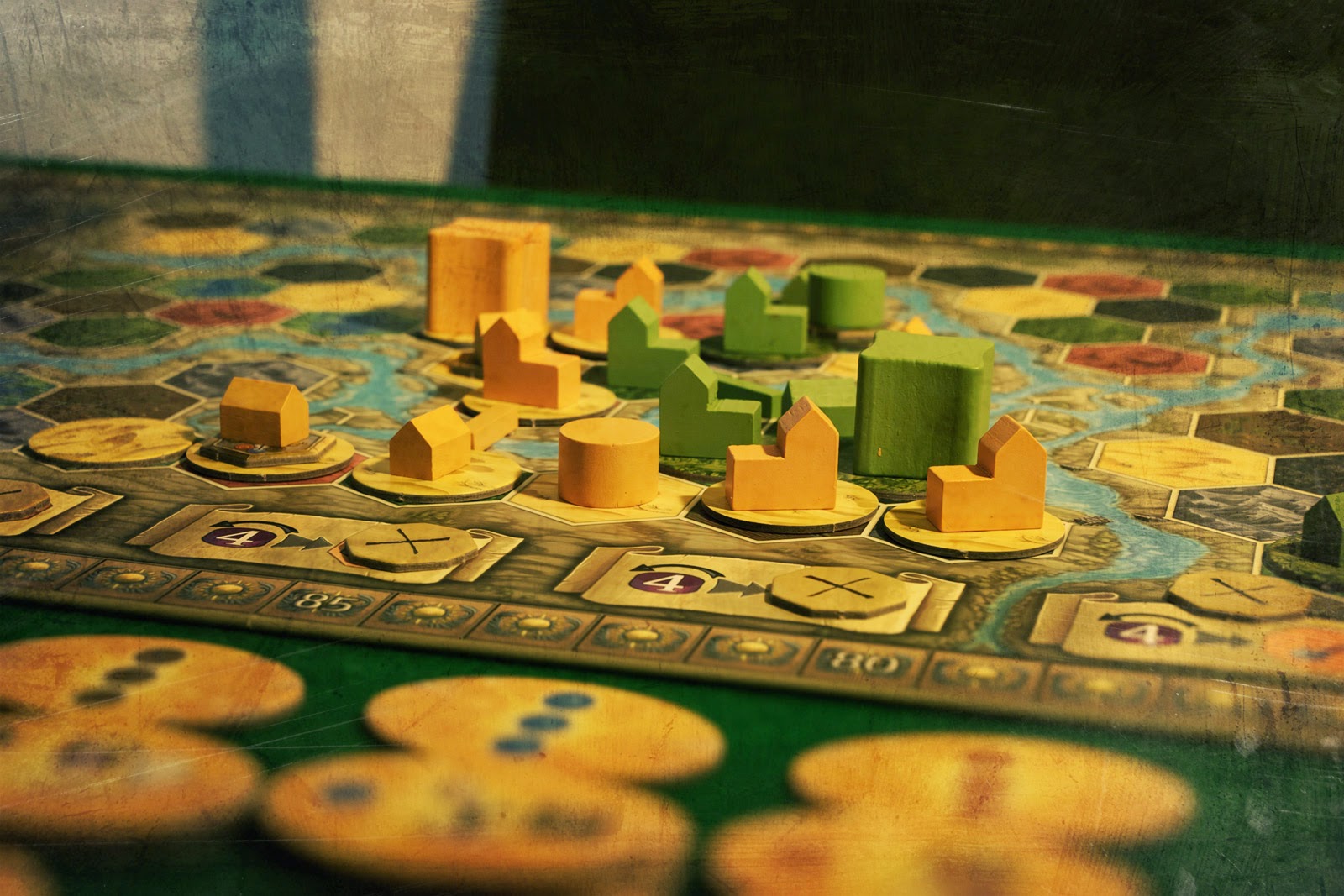 
Each player controls a different fantastical race; giants, mermaids, witches and darklings, to name a few ~ there are 14 to choose from and each has it's own unique powers and weaknesses. The game-board shows a land divided into hexes, each hex one of 7 different terrain types ...and each race particularly likes one of these; mountains for the giants, lakes for the mermaids, forest for the witches and swamp for the darklings etcetera etcetera ...this is the only terrain the particular race will build it's structures upon. All races though have the ability to terraform types of land they don't like into their own, the difficulty of the transformation depends on how similar the land-types are. 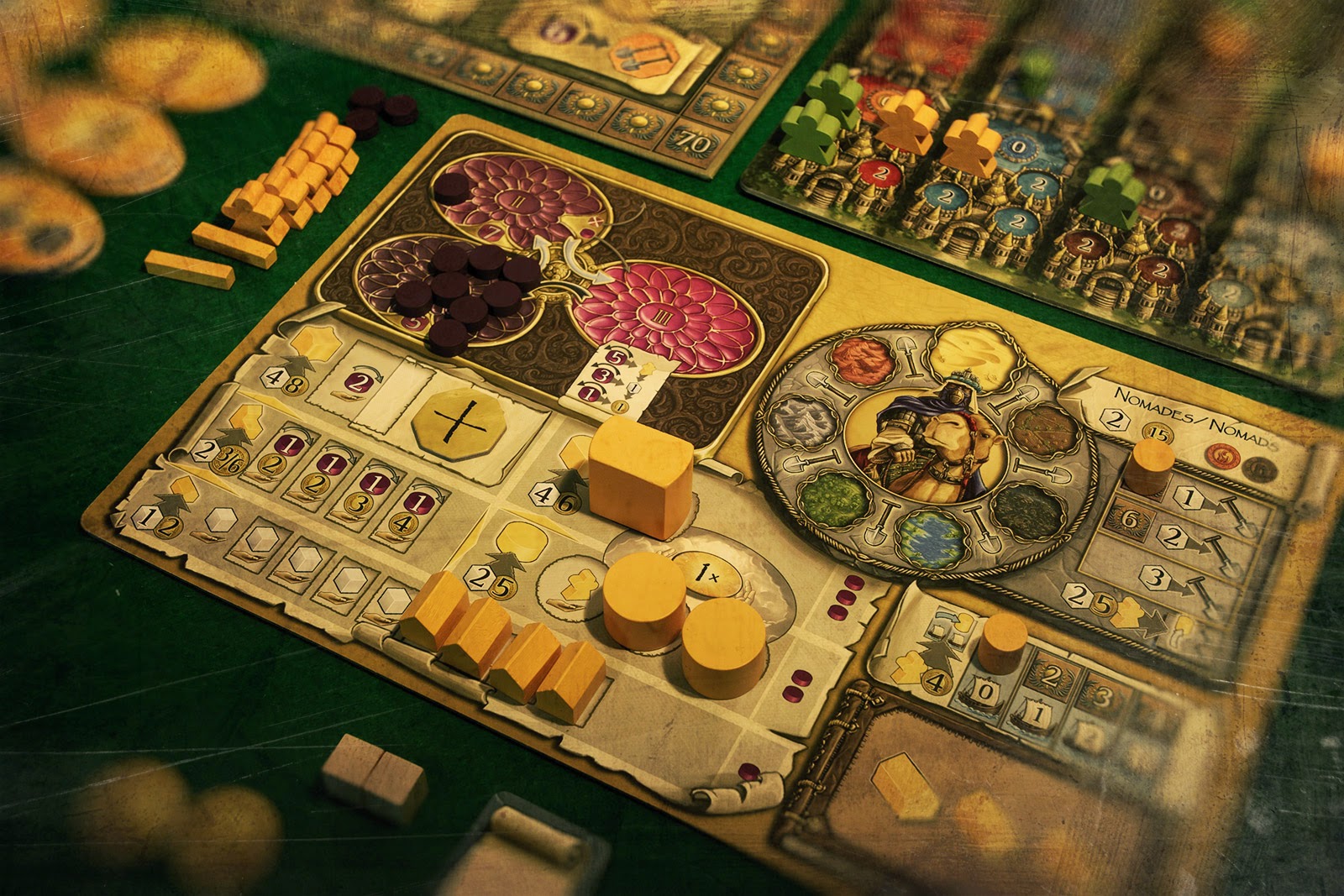 More camels than you can shake a very dessicated stick at.

Every race has it's own player-board upon which their unbuilt structures reside;  as a race builds new structures on the map they reveal resources that were concealed beneath them on their boards that will be available in following rounds. Some buildings provide an instant benefit upon building them, and others open an extra special race ability. 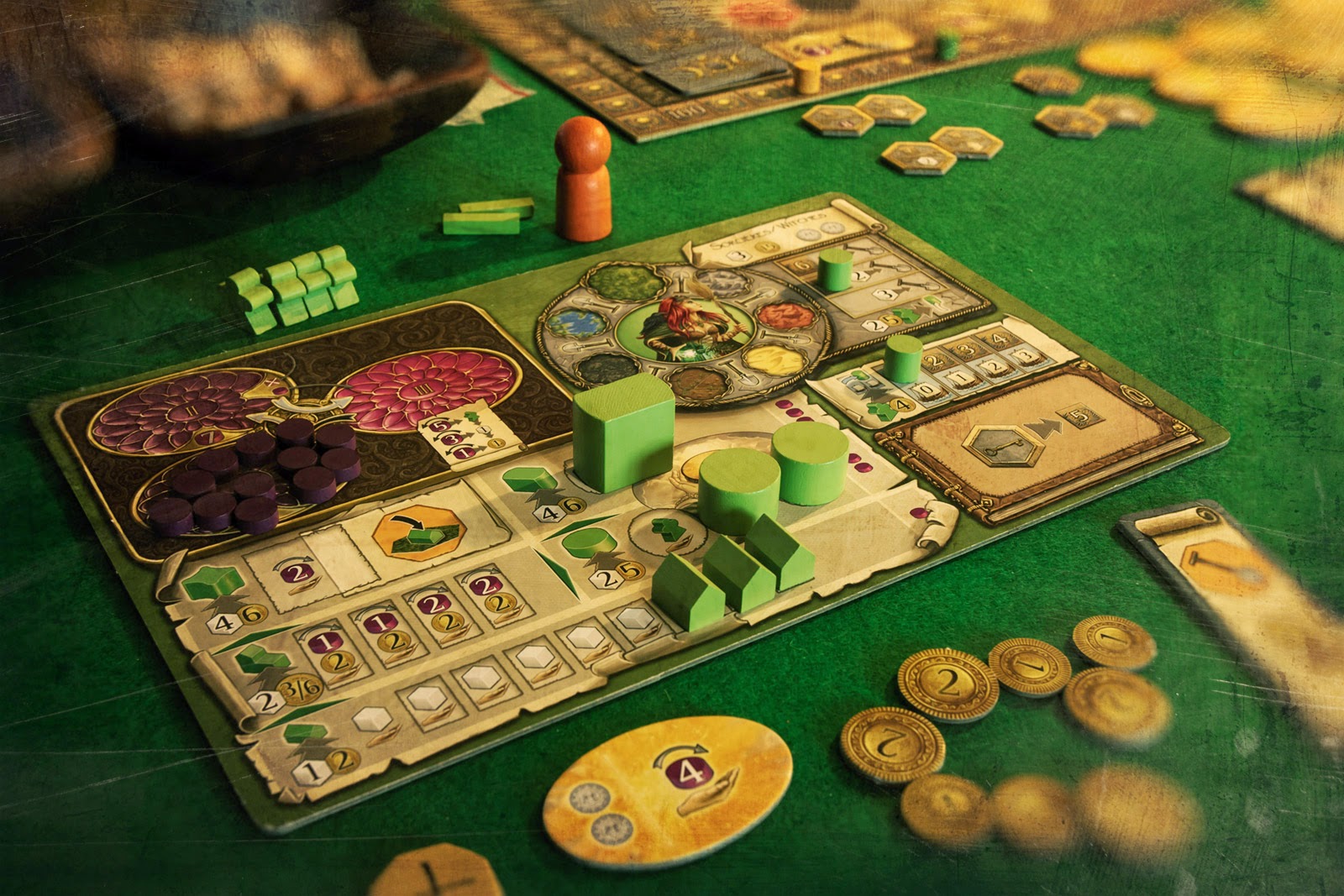 At first glance the races may all seem rather similar, but at a closer look you'll notice small differences ...costs to build structures, what resources the structures provide, special abilities ...and other little differences. If you find you do well with one race, then try the same play style with one of the others, there's a good chance the outcome will be very different. 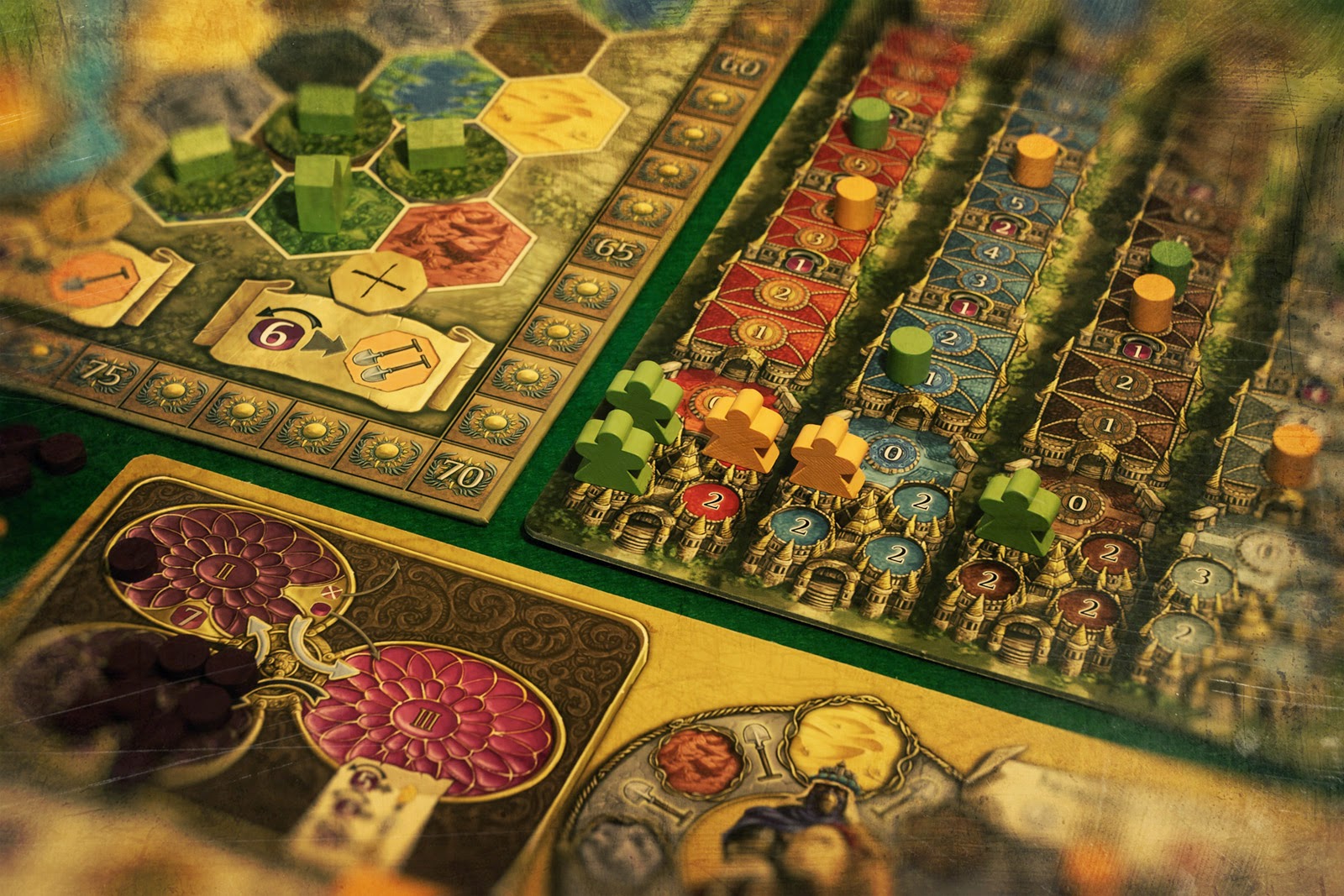 Priests off working at Cult headquarters.

To prevent players from hiding away in their own little corners of the board the designers have made it beneficial (to all involved) when building adjacent to another race's structures. The builder can get things constructed at a lower cost, while players with neighbouring structures can gain power. This makes for some tactical plays ... especially when there are a larger number of players at the table. 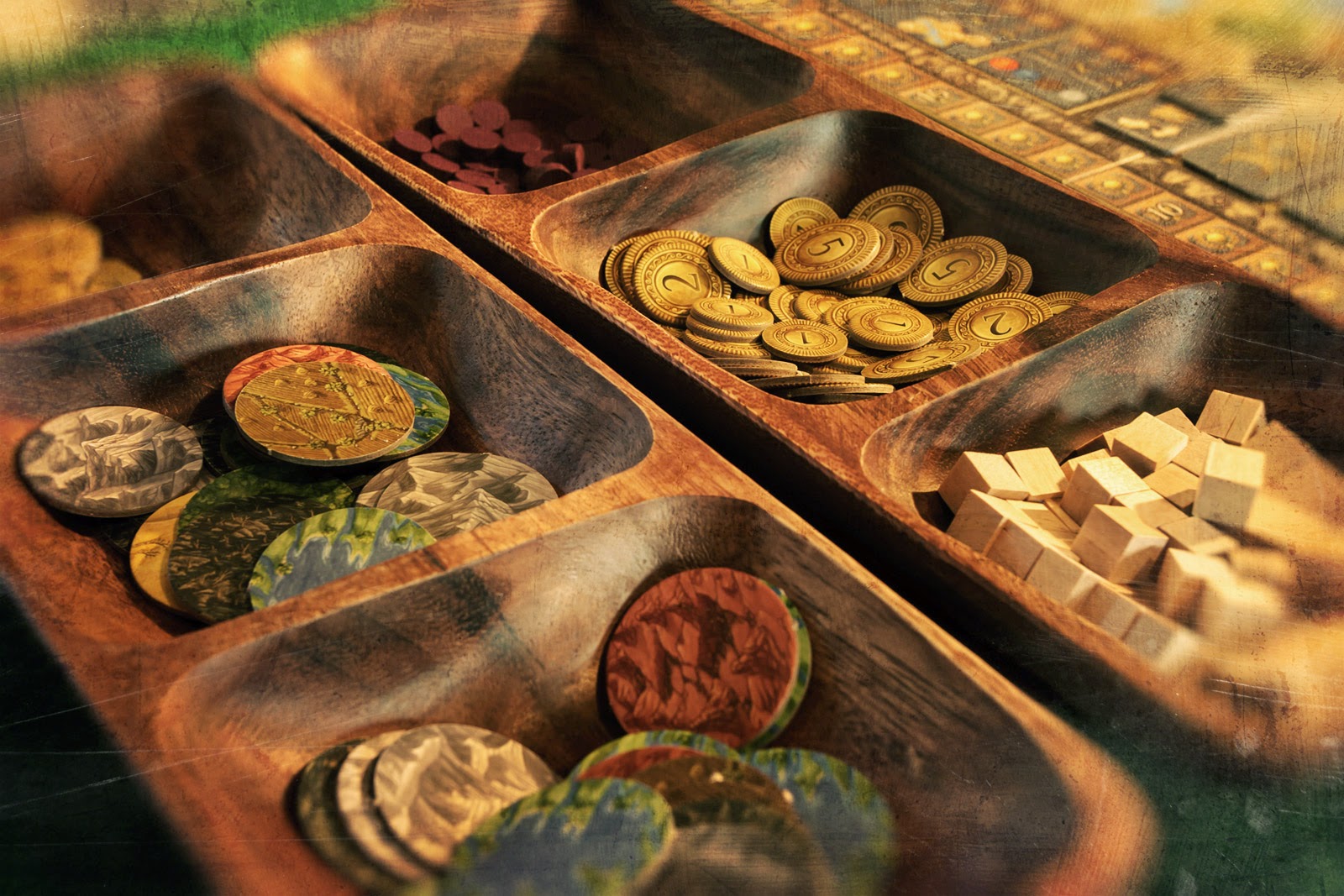 Land, workers, cash and power ...what more do you need.

The other mechanic that really makes this game is the (3) bowls of power. The power is accumulated through various means and can be used to perform certain special actions.
These abilities are once-per-rounders and first in first served. If power is spent from a player's third bowl, they get to keep the power spent ~ it is moved to the lowest bowl. If it is paid from their second bowl, the player permanently loses an additional amount equal to what was paid ~ this is not always a bad thing, but does reduce their overall power pool. Any power gained during the game is not added into their pool, but rather moved from their lowest bowl to the next one up; the power circulating round and round as it is spent and gained. The mechanic is very cool. 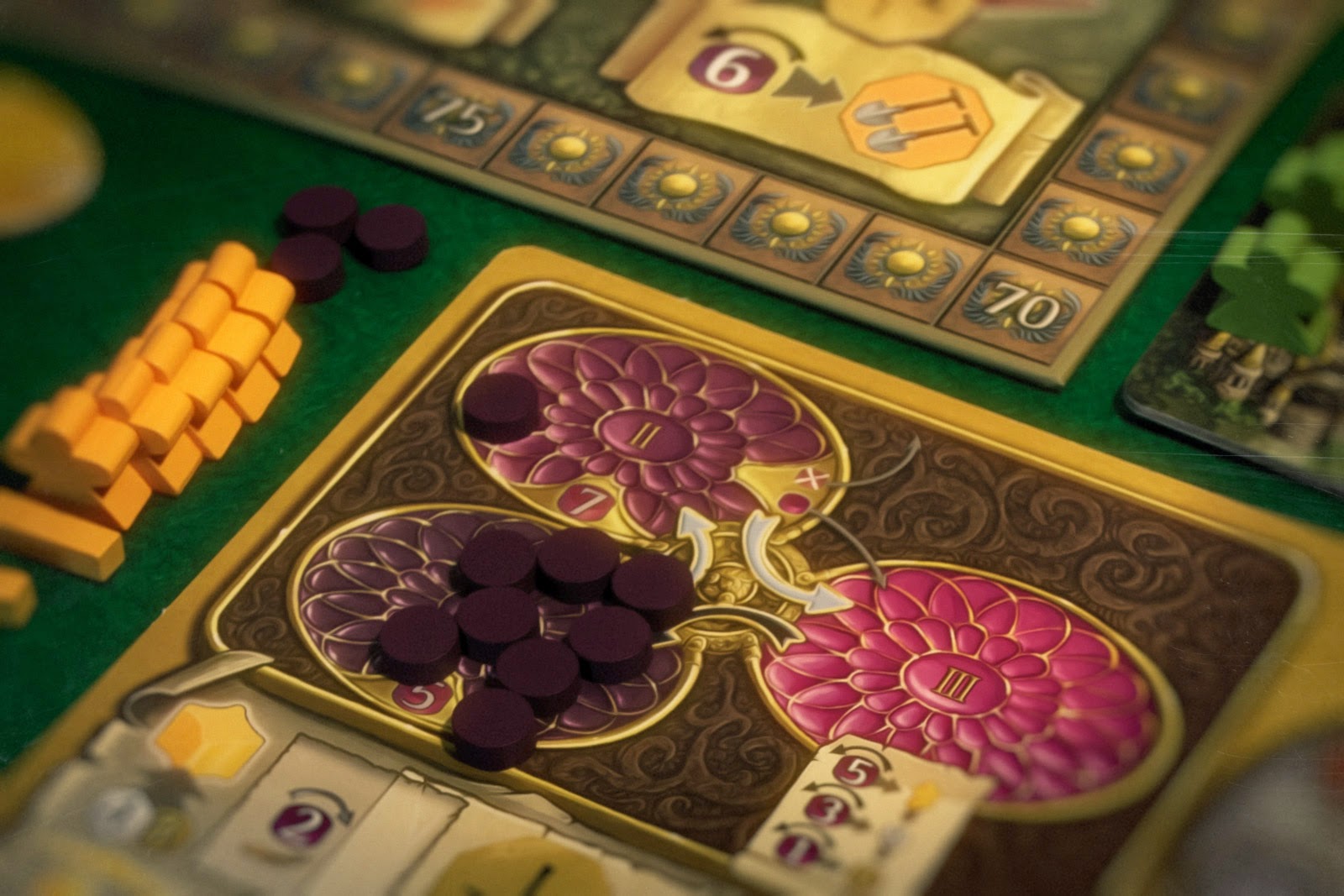 I've mainly played this as a 2-player game and I've enjoyed it each and every time. I can see though that it would certainly get better with more at the table. I can also see that if you played this predominantly as a game with several players ...you'd possibly not be a fan of the 2-player game due to the lower chance of the 'building adjacent' aspect not cropping up as much. 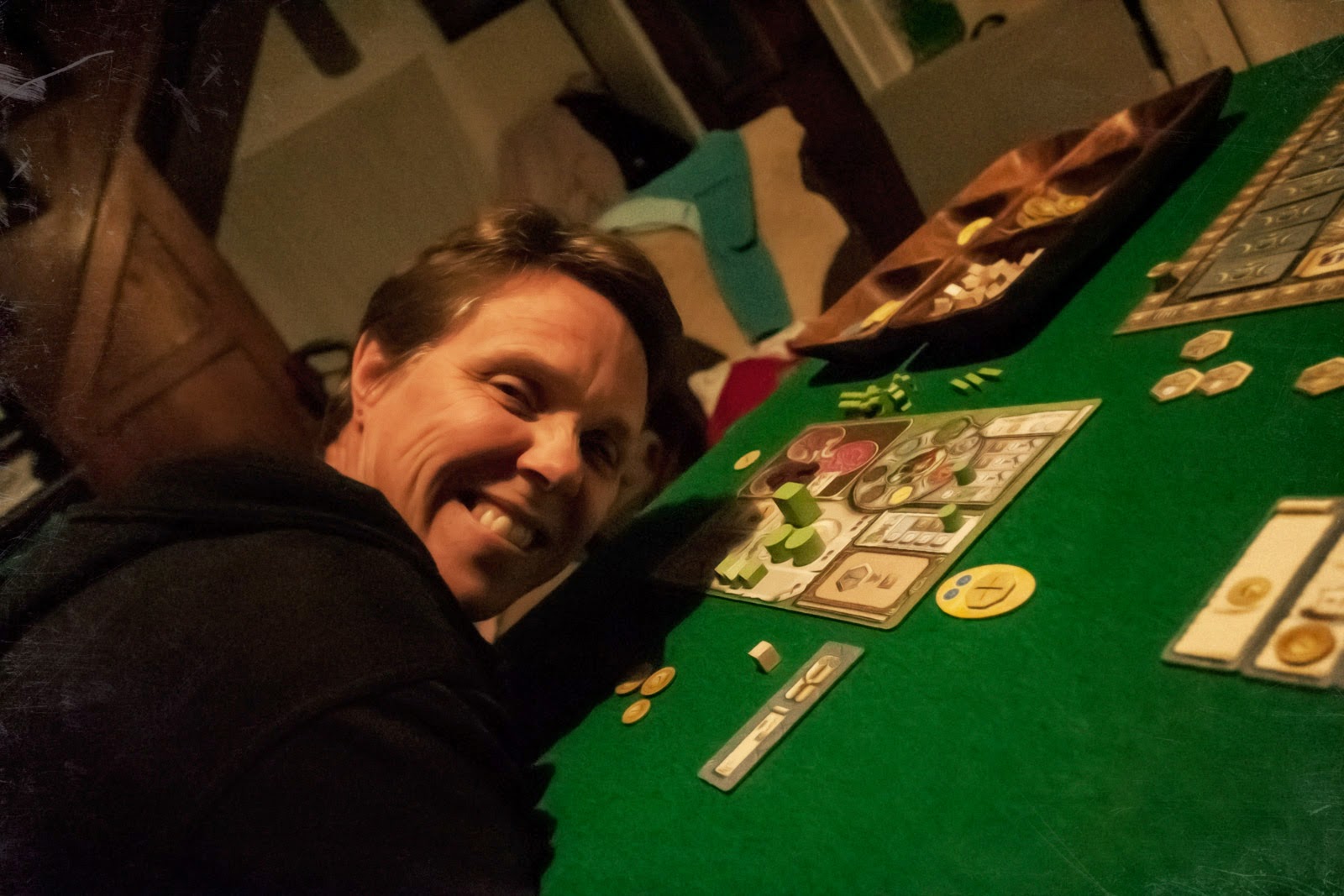 Grinning evilly, my better half takes the win ...again.

Currently this is my go-to game ...and I'm certainly looking forward to the extra tiles I've ordered via the BGG store and the Spielbox shop ;)
Fingers crossed our postie doesn't fold the package, emblazoned with "DO NOT FOLD", in half and force it into the letterbox slot like last time.

Email ThisBlogThis!Share to TwitterShare to FacebookShare to Pinterest
Labels: Board Game, Terra Mystica