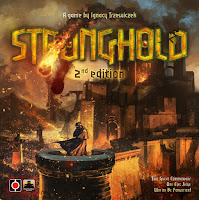 Again with the great games Ignacy! This time, Mr Trzewiczek has assembled a fine board game revolving around the laying of siege to a fortified town. The game itself has been around for a while ... the first edition came out in 2009 ... this year Stronghold 2nd Edition was released. I'd had my eye on it for some time, due to it being from the same designer who created the truly magnificent Robinson Crusoe: Adventures on the Cursed Island ...but after a request to sculpt some pieces, I thought, I really should pick up a copy ~ and I was certainly not disappointed.

A 2 player game; one takes control of the encroaching forces of darkness ... trolls, orcs and goblins ... with an evil glint in their eye, a penchant for heavy machines of war - catapults, ballistas, trebuchets and the like, and dark sorcery at their goblinoid fingertips. The other player commands the residents of a stone-walled hamlet; archers and knights lining the battlements, manning cannons, cauldrons of searing oil, clerics invoking blessings from the gods ... and townsfolk building and rebuilding the walls as they are continually demolished by the fiends trying to gain entry. 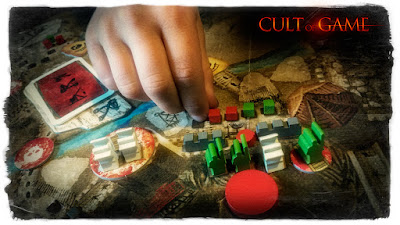 They're at the wall... get ready with the oil!

The game runs for several rounds, broken into various actions alternating between the players; if by the end of the seventh, the forces of evil have been kept from entering the township, the defender is victorious; if though, the green hoard manages to get but a single foul foot within the town limits, a terrible fate befalls the citizens.

I won't go into the game-play details; Rodney Smith of Watch it Played - has a great video explaining it all - I'd recommend checking it out if you're interested.

The rulebook (not the actual rules ... the game is solid!) is unfortunately a bit hinky. Certain details can be a bit hard to discern and I had to visit the BGG rules forums and check through the FAQ Portal released, more than once.
The Esoteric Order of Gamers has also just released a great rules summary that helped me out no end! 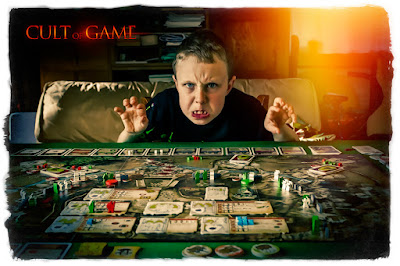 I'll just say it's a lot of fun ~ I had a game with my son (8yrs) and we had a blast. He played as the hoards, no surprises that was his choice, while I defended. It was actually a very close finish - came down to an unlucky ballista shot (the gunner failed to hit his mark) and I managed to hold the wall. If the gunner had made the shot the town would have fallen. He accepted defeat graciously. 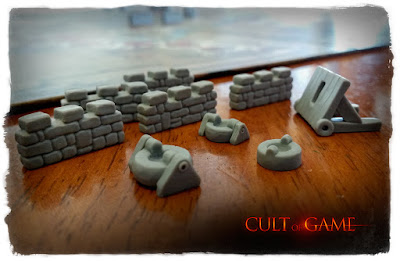 A few of my finished sculpted wall sections and some
cauldron and mantlet WIPs.

All the components are either card or wood. All very high quality ... I will say some of the small cubes can be a little on the gnarly side though, but I suppose orcs and their kin (these cubes represent) aren't known for their uniformity. My mission though, is to pimp this beast out .. Walls (now completed), cauldrons, a slathering of different orcish war machines, and a scattering of other pieces are on the list. 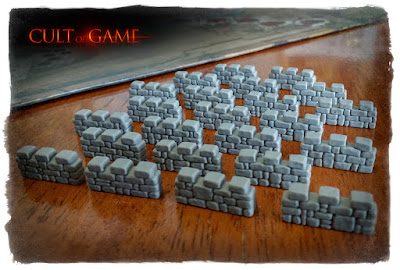 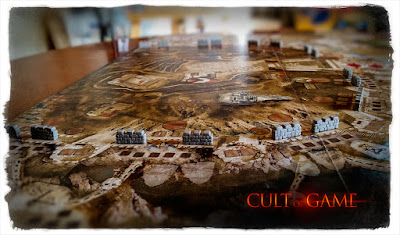 I'll post updates as more pieces are completed. It's certainly going to be fun (and challenging) making these.