What a very curious ball, all overgrown with moss...

I was down at the local Briscoes the other day, in search of a hair dryer (anyone who paints miniatures knows how invaluable they are) as my previous one had given up the ghost ... when my daughter came up to me clutching a strange furry green sphere. She said she'd found it lying on the ground and was wondering what it was.

It was prickly to the touch, covered in what appeared to be static grass, and as soon as I saw it I knew precisely what it was ... it was the top of a tree in a forest section for my war-gaming table!
Ok .. so it wasn't really a tree-top; it was obviously some ornamental moss ball meant to be stacked in a bowl in the middle of your dining table or some such. This moss ball though had another destiny.

I  began fossicking about ... if there was one, there must surely be others. I came across a pack, a single pack, of four more balls. Two larger than the one found on the floor and two the same size. I took them to the checkout along with my new hair dryer ...  I paid about $8 for the four-pack plus one additional dollar for the stray ... seemed fair to me.

As soon as I got home I set to work making two new forest sections. I currently owned no forest sections whatsoever, so I was rather keen to get these on the table!

Here are a few snaps I took during assembly... 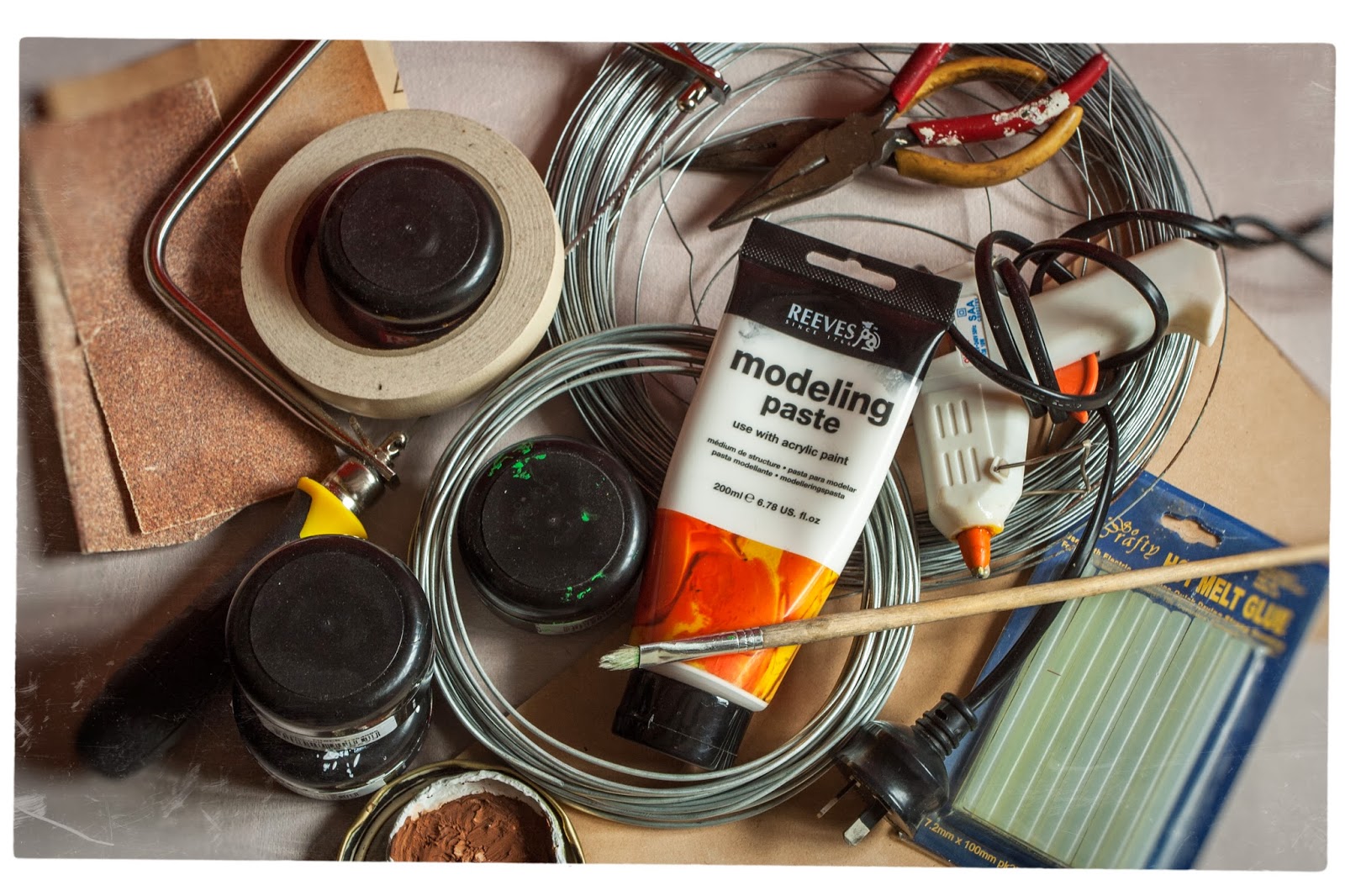 Tools (some, but not all) of the trade I used ... 3mm MDF for the bases, fret saw, wire (2mm and 1mm approx), masking tade, 'Reeves' modeling paste, pliers, hot glue gun, sandpaper (60 and 150 grade), coarse bristle paintbrush, couple of lids for mixing in, and some acrylic paint: 'Resene' brown, green, black and white. 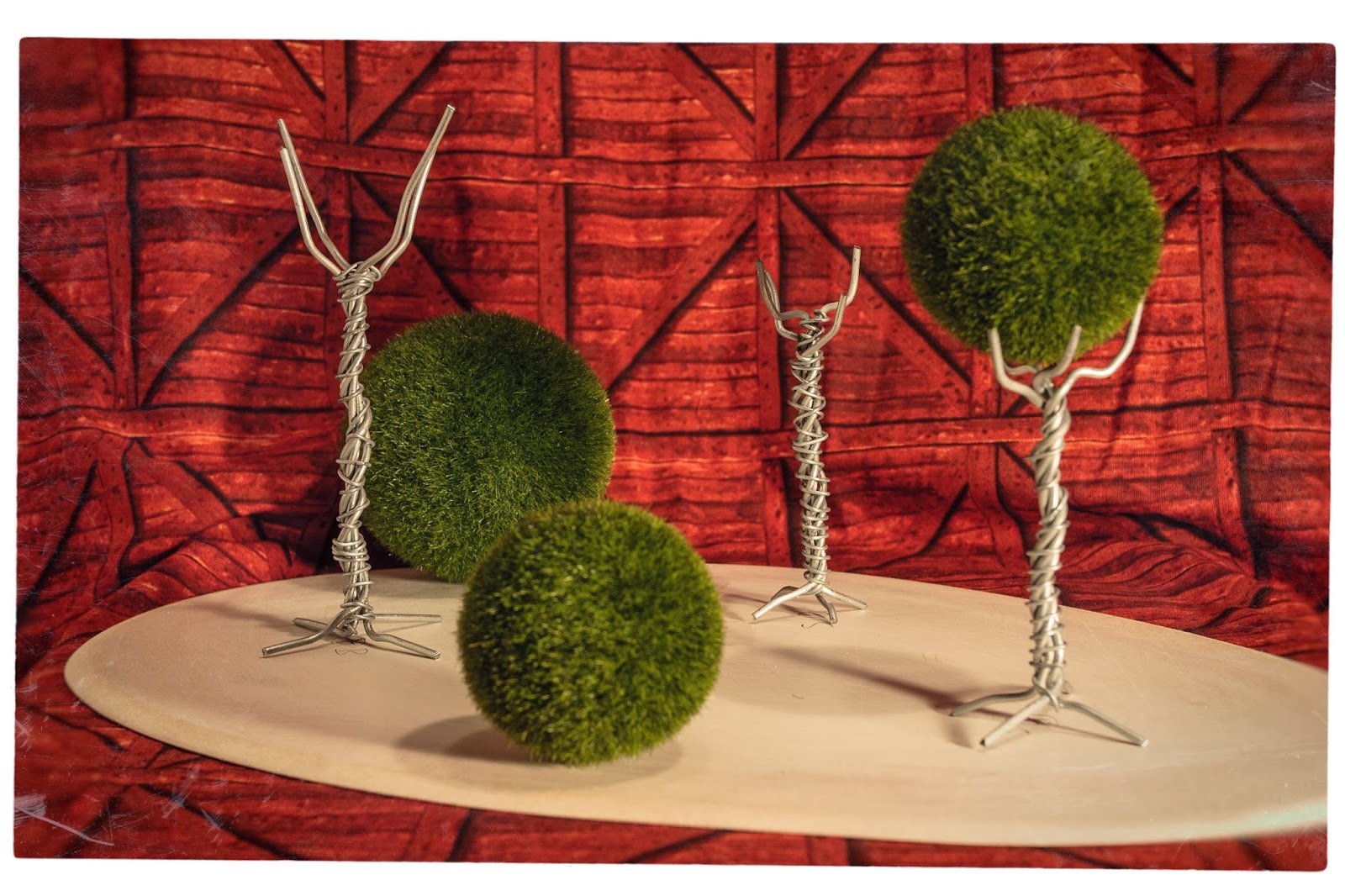 After cutting and sanding the 3mm MDF bases I made the tree skeletons. Each is made from 4 lengths of 2mm wire, twisted using the pliers, leaving four branches and four roots at each end. A length of 1 mm wire was wrapped around the trunk to bind all in place. 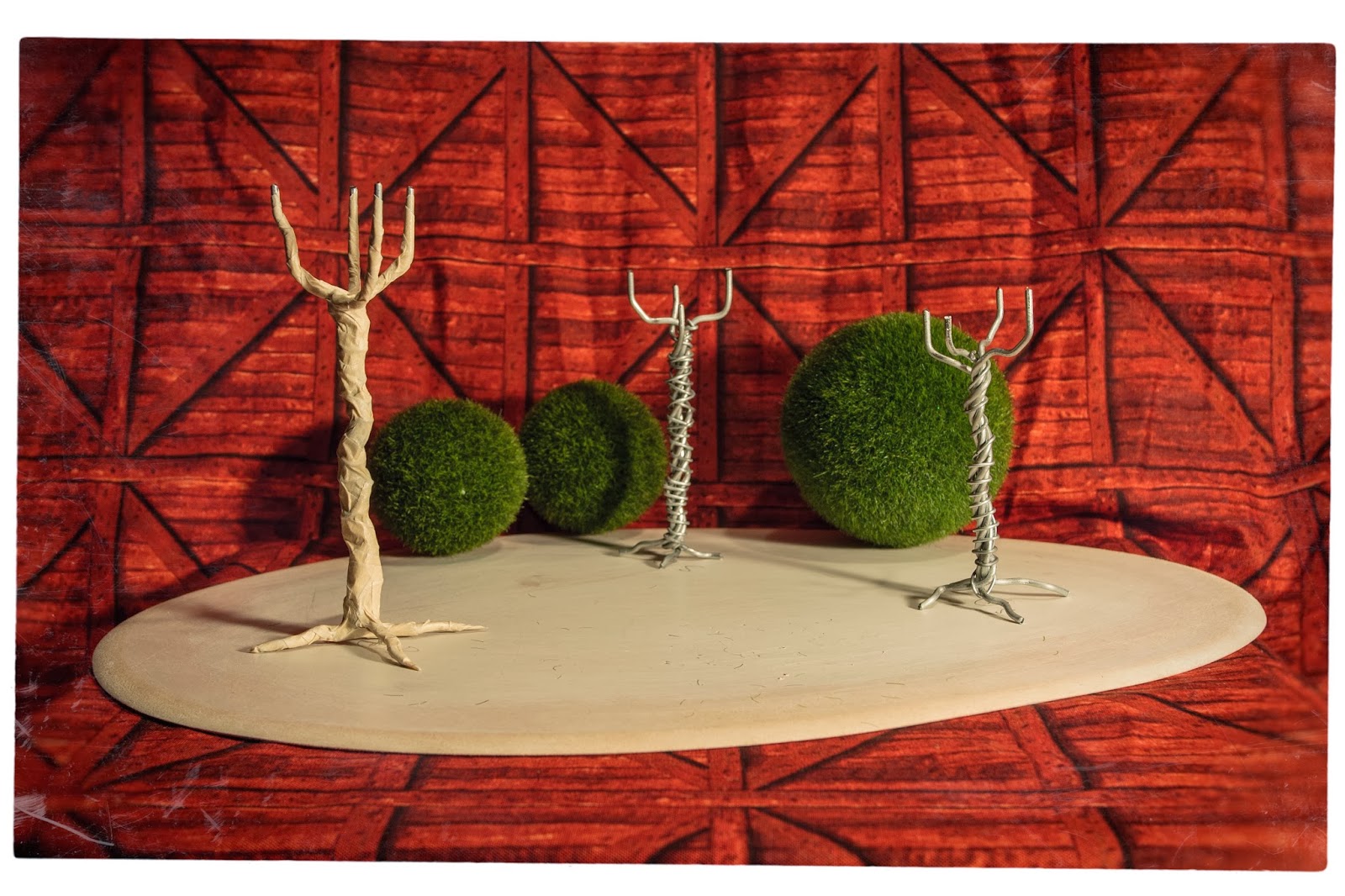 I then bent the branches into more pleasing positions, planning for them to be poked into the moss balls. Masking tape, torn into easily manageable short lengths (an inch to a couple of inches) was then wrapped around the branches, trunk and roots... 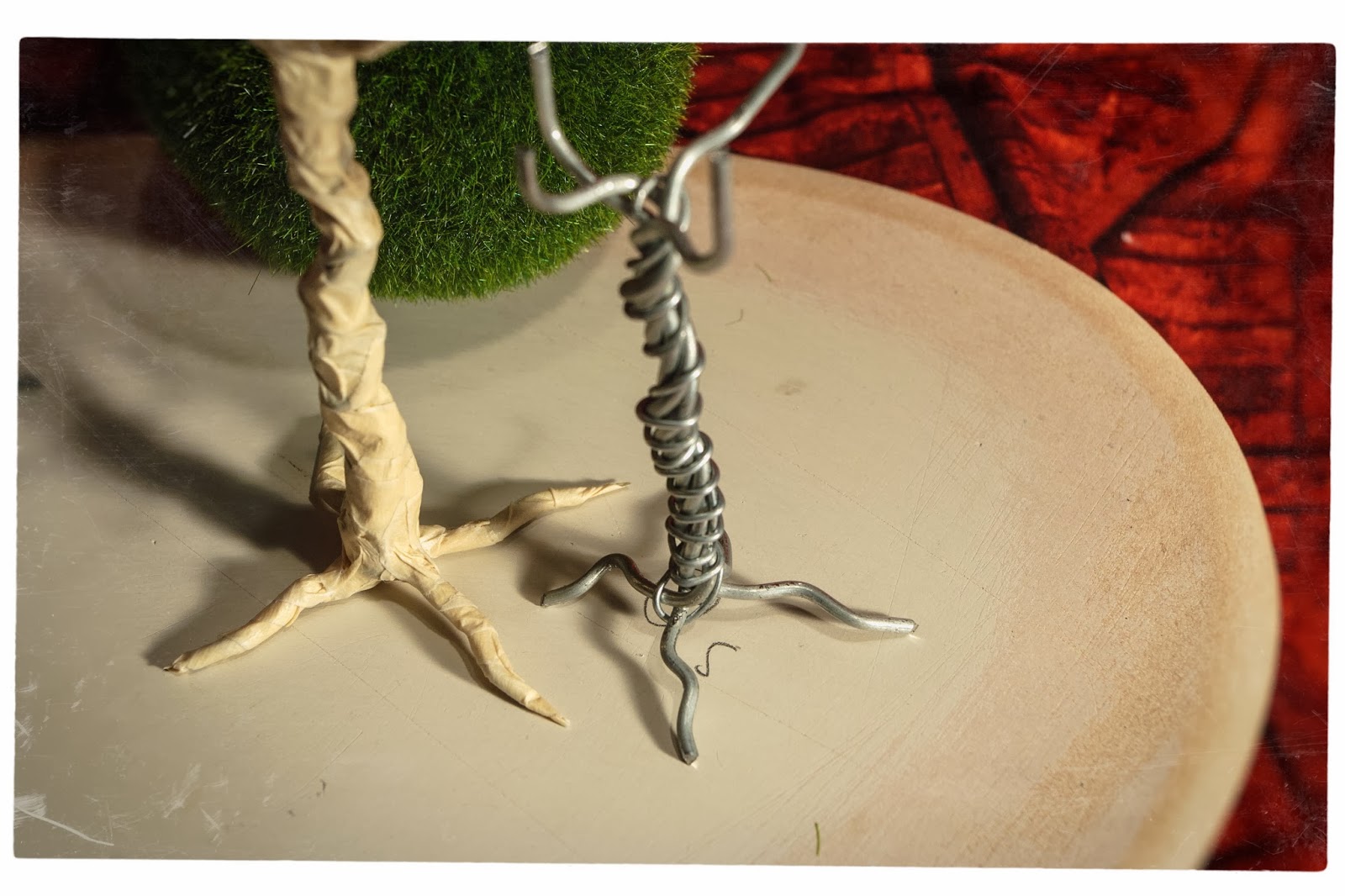 ...tapering off at the tip of each root to a point. 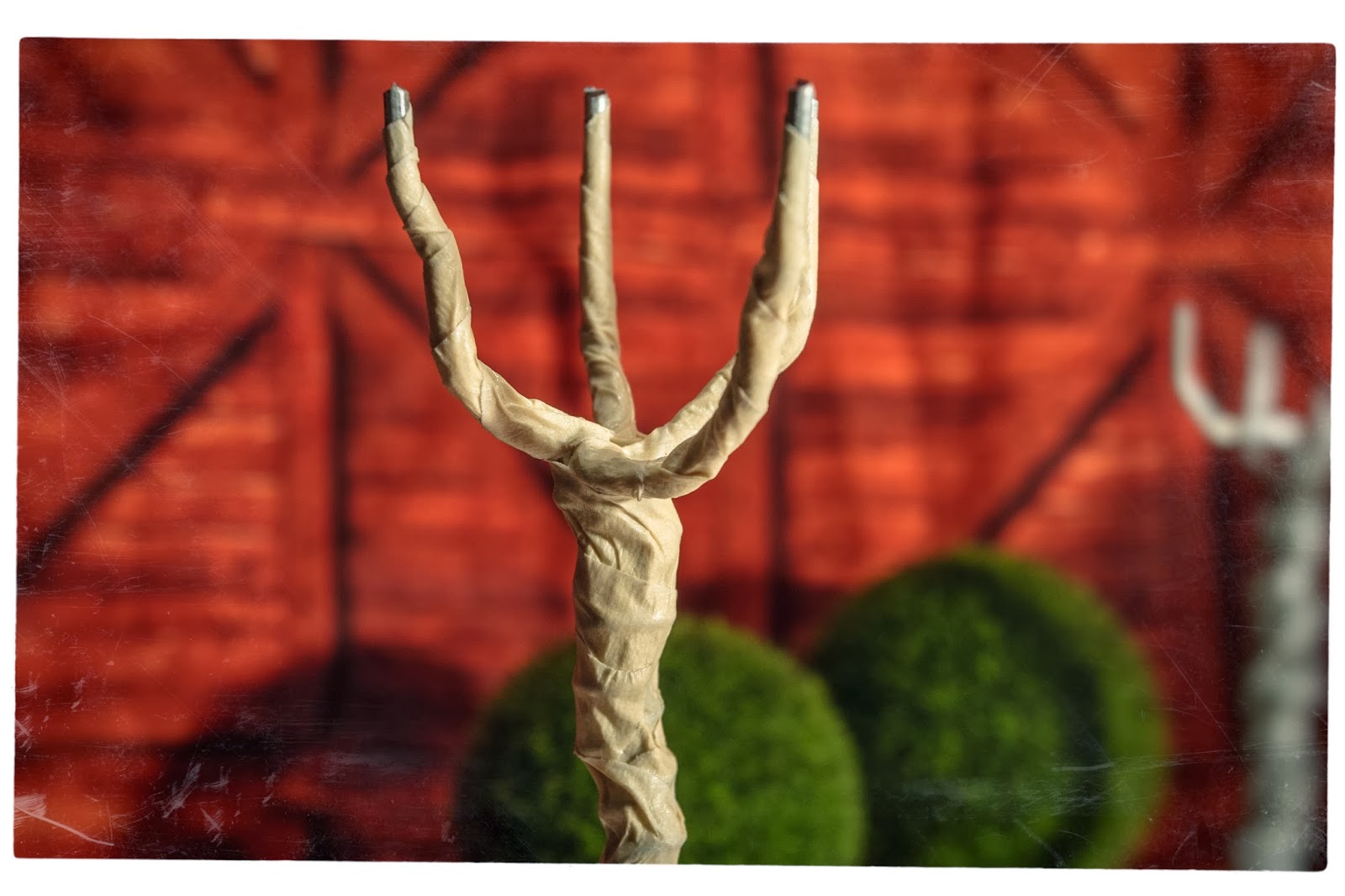 I left the wire exposed at the branch tips for easy impaling of the moss balls. 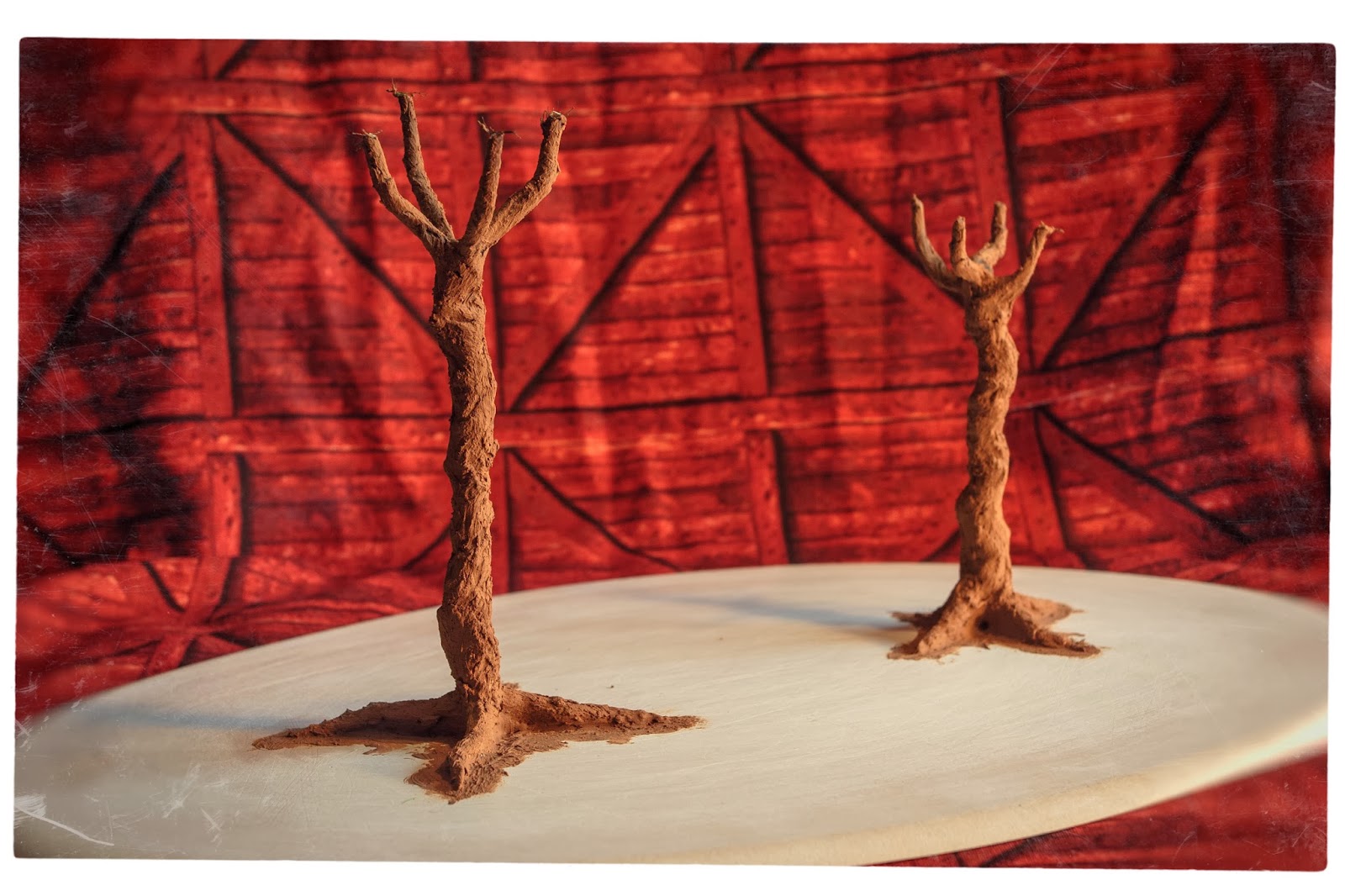 I then hot-glued each tree to the MDF base. Mixing a little brown acrylic with some modeling paste, I used the coarse bristled brush to paint it all over each tree and down onto the ground around the roots. 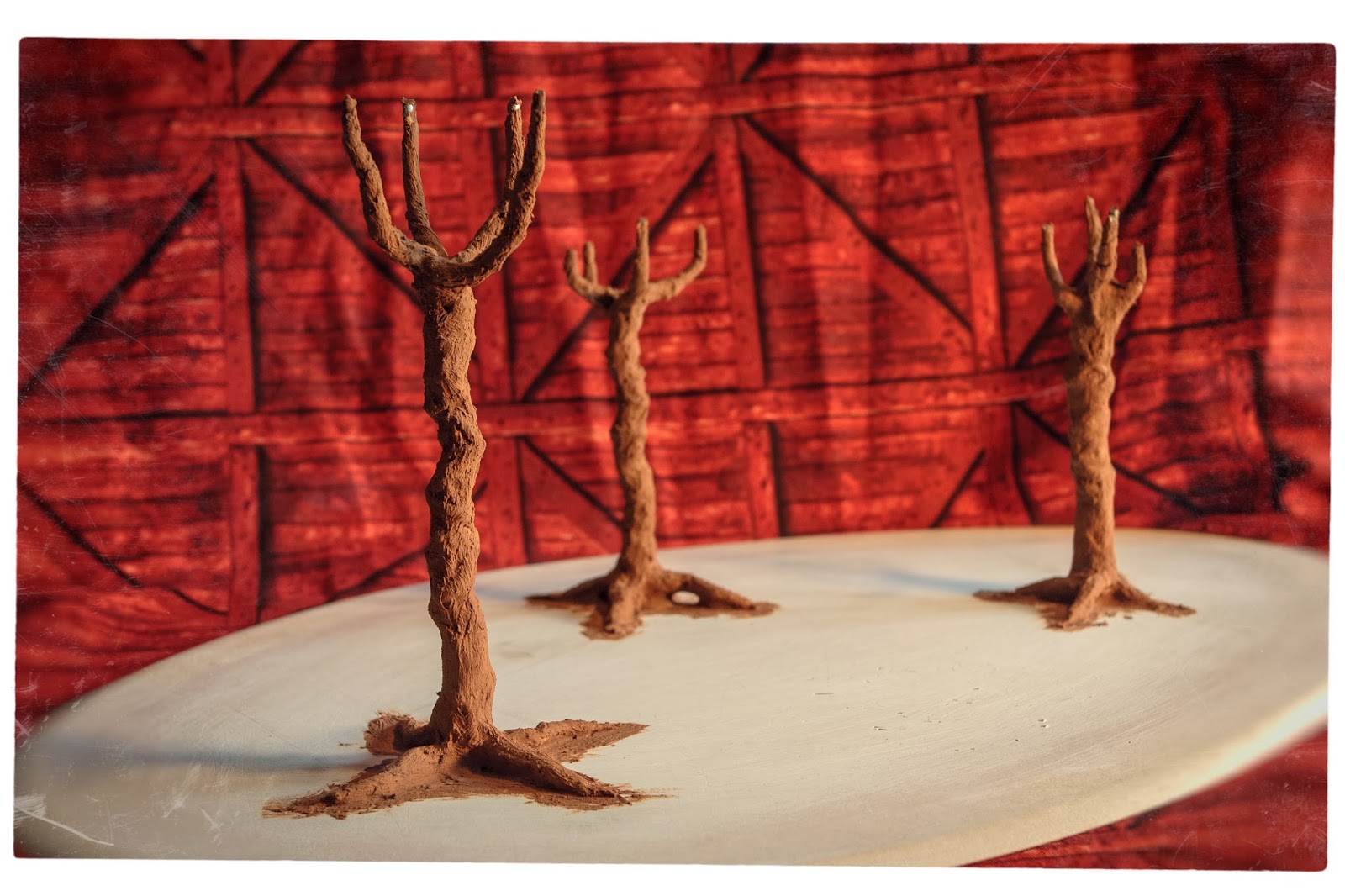 The brown paint added to the modeling paste wasn't absolutely necessary... but, it does save undercoating the tree brown afterwards. 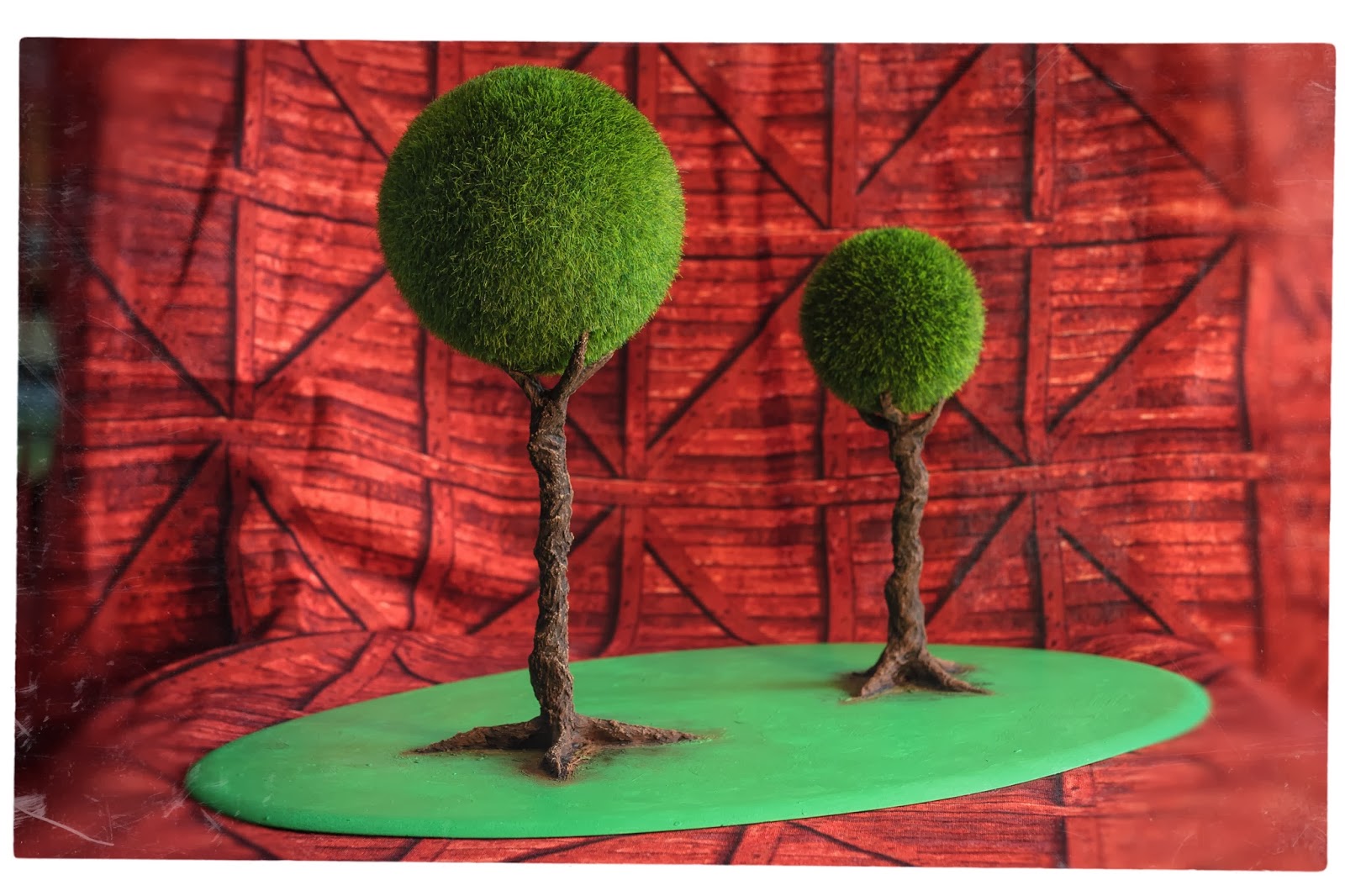 Once dry, I then dry-brushed the trunks with a couple of shades of lighter brown... the Resene brown mixed with a little Resene white (it was actually alabaster .. but close enough). Following that, once dry, I made a wash from the brown paint mixed with a little black and gave each tree a coat. Then... I carefully pushed each moss ball onto the branches (after I had made small starter holes with a kebab skewer for each branch tip). 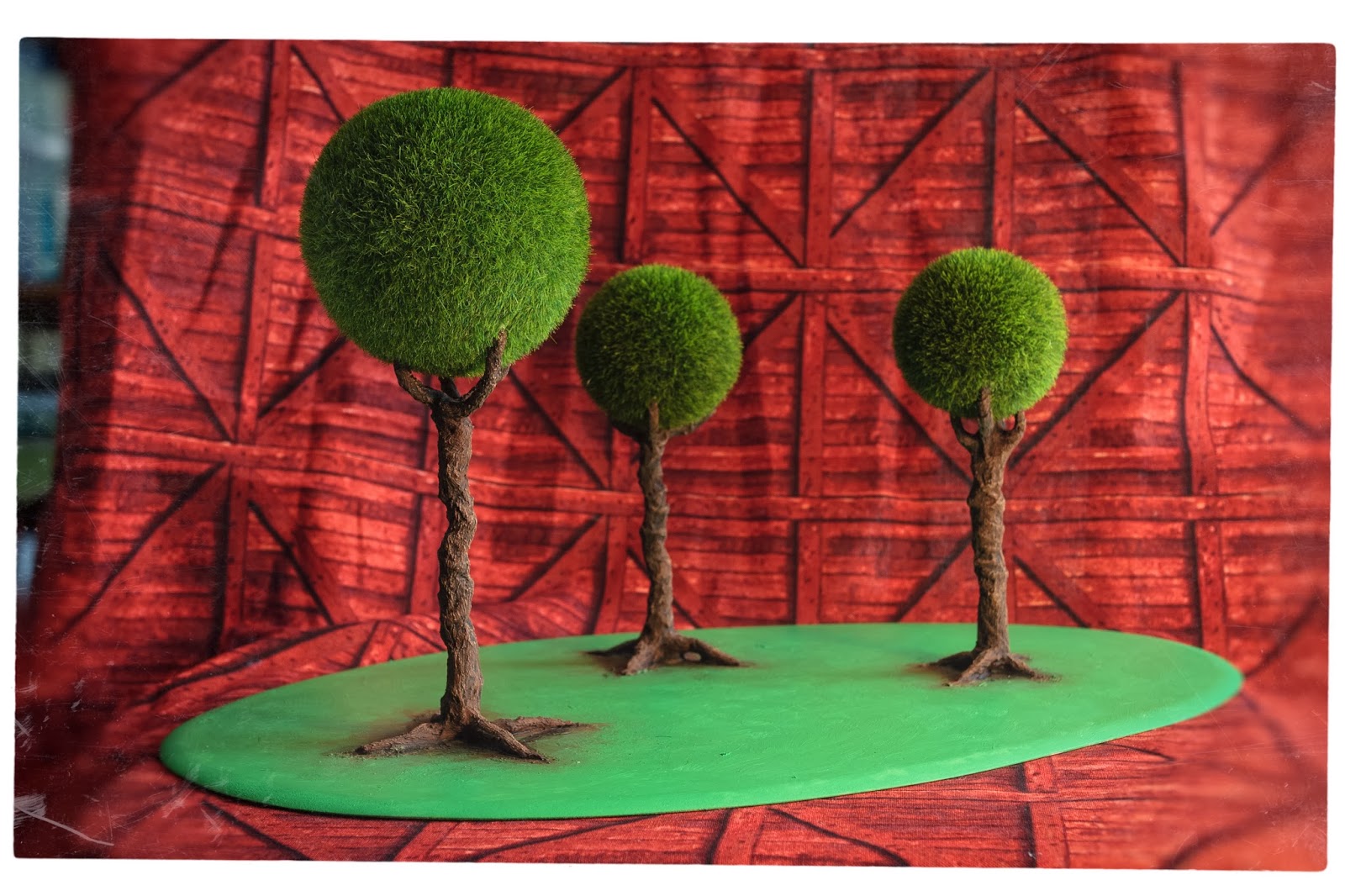 I then removed the balls, squeezed a little glue (I used Elmers Tacky Glue) into each hole. Then reinserted the branches, carefully pushing the moss balls back firmly into place. The base was then painted in the green with a little brown blended on the ground around the roots. 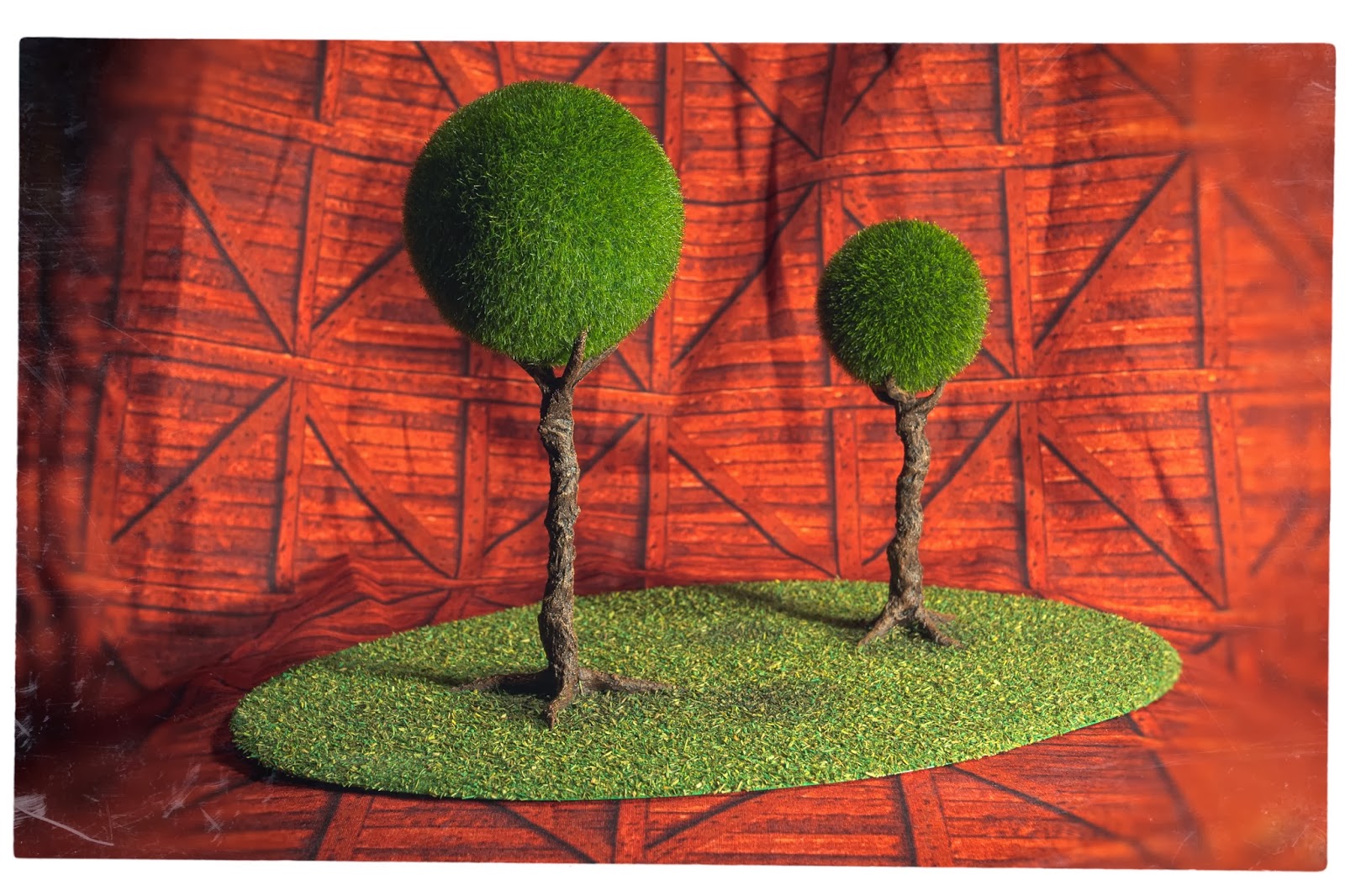 Once dry I gave a liberal coat of Mod Podge Matt (an acrylic glue and sealer) and applied flock over all. 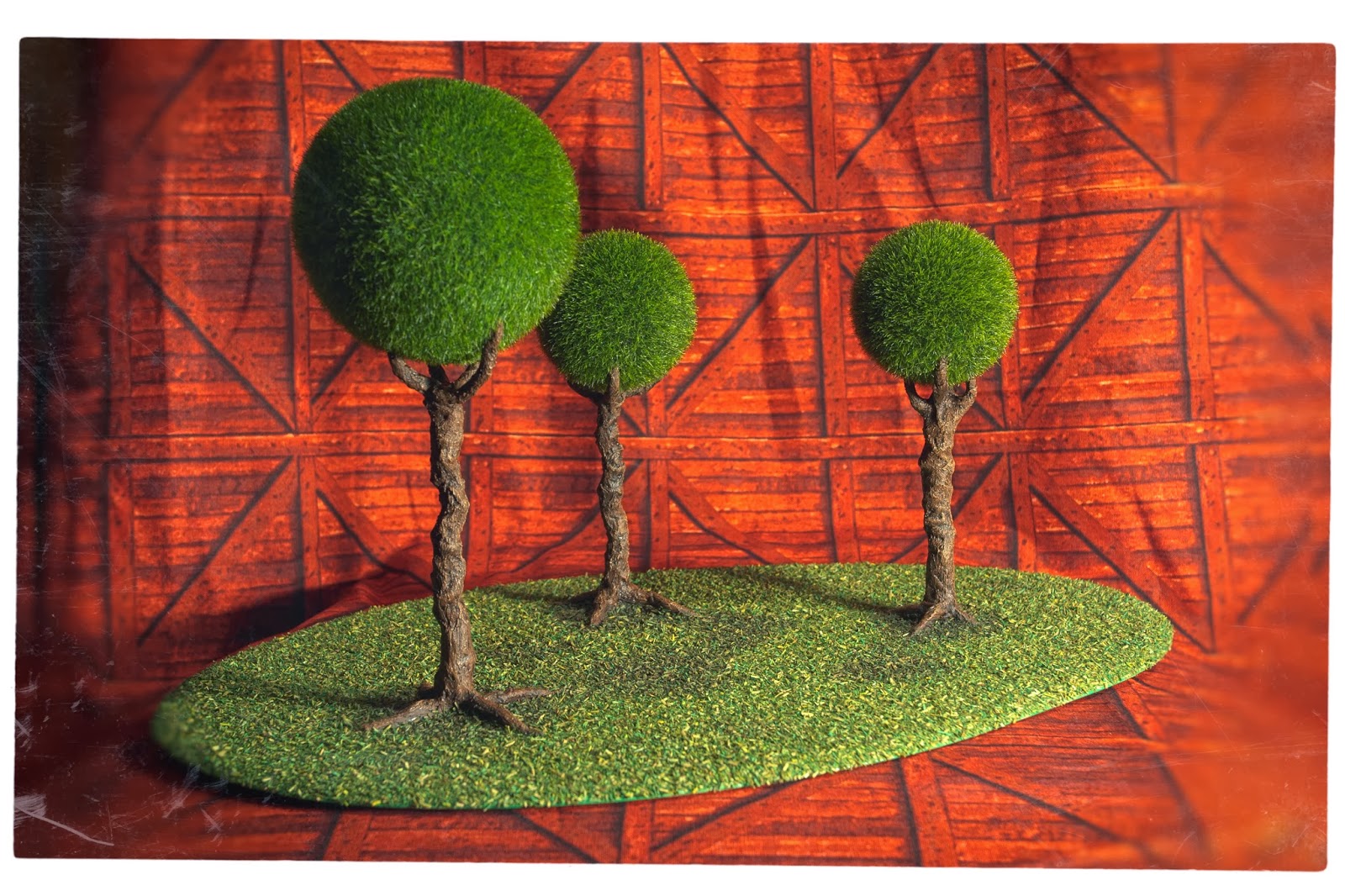 After that had dried in place, I gave a couple of good coats of Super-Hold hairspray to the flocked base as well as the trunks and the moss ball canopies. 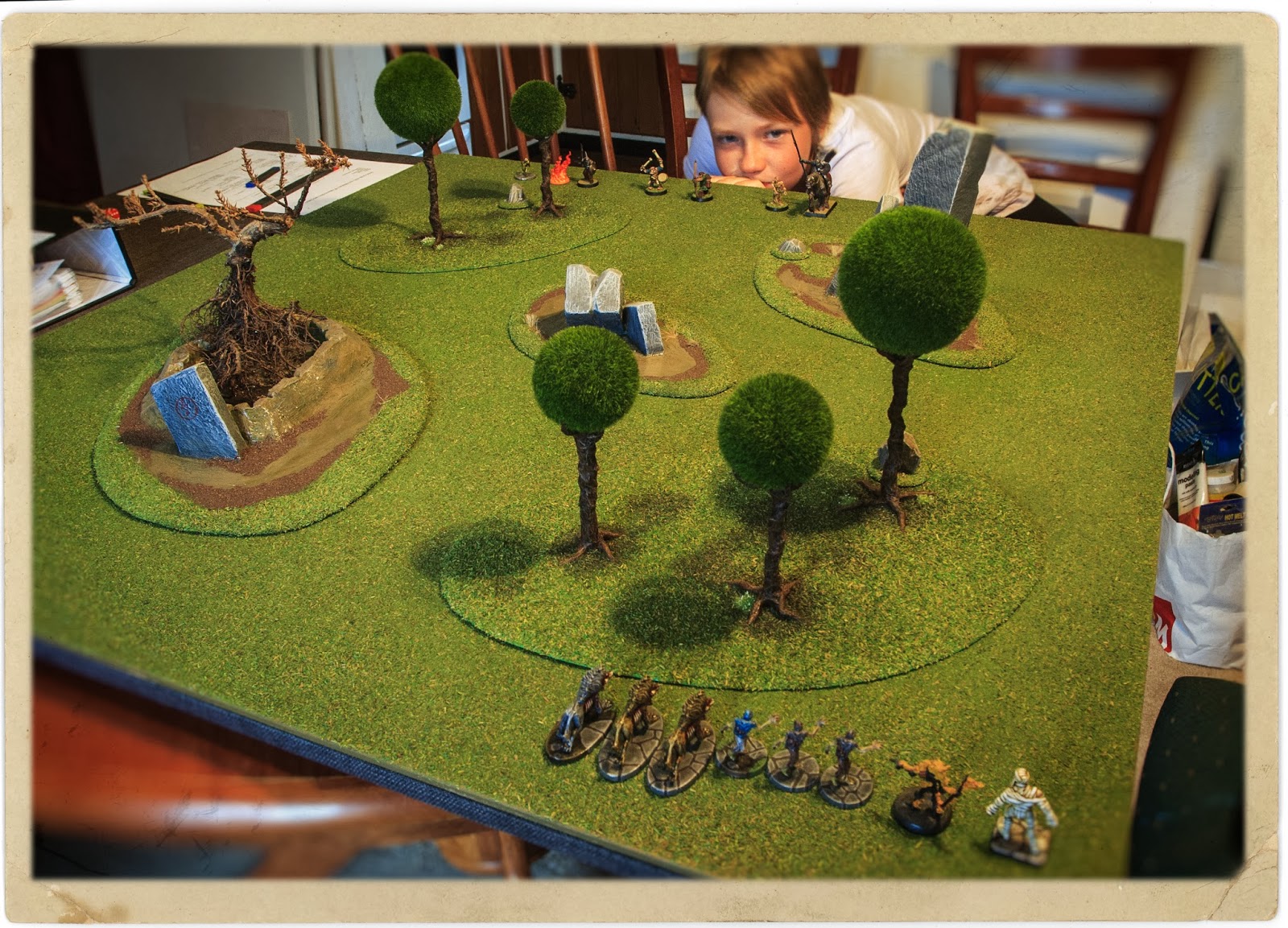 Here are the forest sections in action (I also added a few 'field flowers' among the roots for a bit of interest).

Just a quick disclaimer to mention this 'wire skeleton wrapped in tape and paste' is something I've seen used in various places, and I'm certainly not claiming it to be something I myself came up with. I haven't though seen many (if any) moss-ball trees on gaming tables, but I think they work really well ... and I'm certainly happy with the results; crazy Dr Suessesque topiary-style trees that they are :)